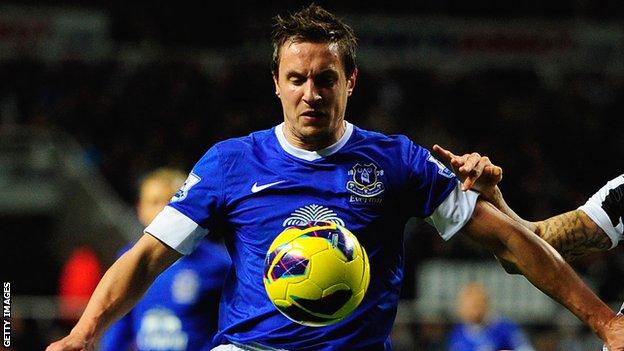 Everton defender Phil Jagielka has signed a new contract with the club.

The 30-year-old England international is now contracted at Goodison Park until the summer of 2017, penning a two-year extension to his current deal.

The Toffees signed Jagielka from Sheffield United for £4m in July 2007 and he has featured in every league game for the club this season.

Jagielka was subject of a £10m bid from Arsenal in July 2011, four months after he signed a new four-year contract at Everton, and it now looks likely that he may see out his career at the Merseyside club.

Elstone added: "Phil is a hugely important and influential player and I, like many Evertonians, look forward to seeing him play in a blue shirt for many years to come.

"Discussions have been taking place for a short while and, now they are completed, I would like to thank Phil and his representatives for the professionalism and courtesy shown throughout those negotiations."

Jagielka has 16 senior international caps for England since his debut in 2008 and has played in three of his country's four qualifiers for next summer's World Cup in Brazil.

His new deal comes less than a week after Republic of Ireland defender Seamus Coleman, 24, signed a new five-and-a-half-year deal.