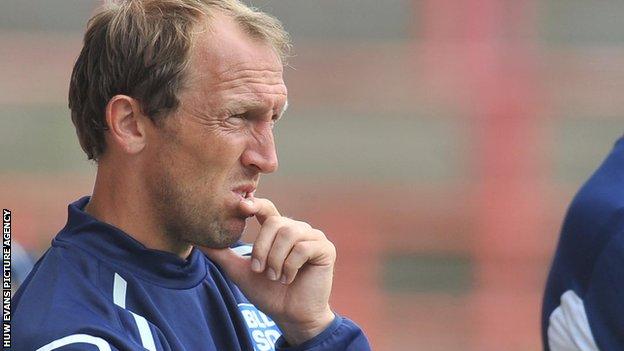 Wrexham player-manager Andy Morrell expects Newport County will be a like a "wounded animal" when the sides meet at Rodney Parade.

And Morrell says Justin Edinburgh's side should be fired up ahead of Friday's Blue Square Bet Premier Welsh derby.

"I'm sure they'll be looking for a response, especially the manager, from his team," Morrell said.

The lads have been fantastic. They've done great for us so far and dug in when they've needed to

"[They're] probably a wounded animal and looking to get back to winning ways and prove they are a good team.

"That's what I'd expect from a team if we got beat 5-0. It happens in football.

"We've got to be ready to go there with the right attitude and give it a go.

"It will be a good atmosphere down there. The fans are very passionate down there, as are ours and hope for a good game."

Wrexham are currently second in the Blue Square Bet Premier with Newport a point behind them in third place with a game in hand.

The Dragons ended Newport's unbeaten start to the season with a 2-0 win at the Racecourse in September.

Morrell is satisfied with his side's current league position, which sees them a point behind leaders Grimsby Town.

"The lads have been fantastic. They've done great for us so far and dug in when they've needed to," Morrell added.

"I would have liked to have been a bit more consistent but you can't have everything.

"If you would have offered me second in the league after 25 games I probably would have taken it."