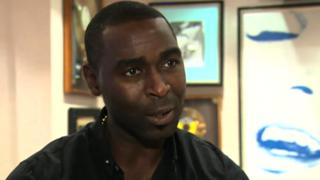 Former Newcastle striker Andrew Cole believes Chelsea's expected signing of striker Demba Ba will be "a good bit of business" for them.

The Senegal international, who has 13 Premier League goals this season, was given permission to speak to Chelsea after the Blues triggered the release clause in his contract.

Cole says Ba's arrival will "take the burden off" Fernando Torres, who has so far scored seven goals in 20 league appearances.