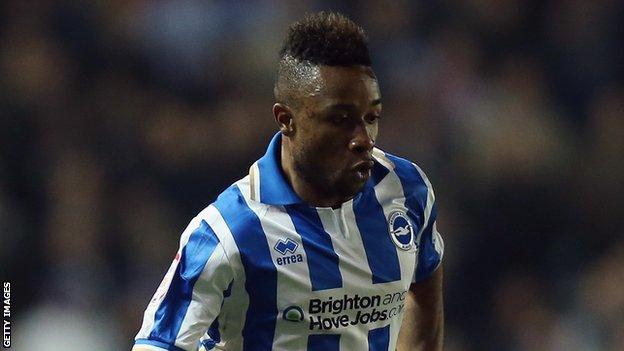 Brighton winger Kazenga LuaLua hopes to feature against former club Newcastle United when they face the Premier League side in the FA Cup third round.

The 22-year-old missed out on Albion's 1-0 win over the Magpies at the third round stage last season through injury.

He told BBC Sussex: "It's always good to play against your former club and it will be a special game for me.

"I was forcing myself to get back fit [last season] but it wasn't to be. I was gutted to miss the game."

He added: "I was buzzing to draw them.

"It's an early kick-off so my family will be at home [in the north east] watching."

LuaLua was on the books of Newcastle from the age of 15 after his brother Lomana, the former Newcastle, Portsmouth and Blackpool forward, arranged a trial for him.

LuaLua has started Albion's last two games this season after enduring a frustrating campaign which has seen him largely used as a substitute.

"It has been a tough season for me, with many things off the pitch as well," he said.

"It is just good to get back in the team and try to play well.

"We have had a few injuries so I am hoping to stay in the team.

"The gaffer has just said to believe, play the way I want to play, and that there is no pressure on me."

Albion pulled off an upset against Newcastle in last season's FA Cup on the way to the fifth round of the competition.

LuaLua says the Seagulls believe they are capable of repeating that feat.

"We beat two Premier League clubs last year in Newcastle and Sunderland [in the League Cup] so why not again?" LuaLua said.

"We always believe in the changing room.

"But they are on a bad run and will be desperate to win.

"We are playing against a Premier League team and want to beat them but it won't be easy."