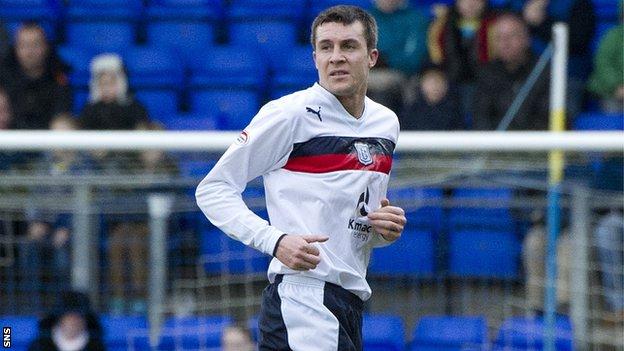 Hartlepool United have agreed to extend striker Colin Nish's loan spell at Dundee until the end of the season.

He arrived at Dens Park in August 2012 from the English League One club and has scored twice in the Scottish Premier League so far this season.

Nish said: "I was hopeful of staying, that was my preferred option. It was down to the two clubs to sort out and it has happened now, so I'm delighted.

"I just need to try to get some goals and some points on the board now."

We need to start winning games. It's simple

BBC Scotland understands that manager Barry Smith's position will be discussed by Dundee's board on Friday, while a banner at half-time at McDiarmid Park as the team lost 1-0 St Johnstone read: "Smith must go."

But Nish is confident Dundee, sitting nine points adrift of safety in the SPL, can avoid relegation.

"We know we can do it, but we need to do it rather than just saying it," he said.

"We need to start winning games. It's simple.

"We need them to stick by us. As a team and as a club, we need everything going in the one direction."

Speaking to Dundee's official website, Smith explained why retaining Nish is important for the club.

"He's a different type of striker to what we've got and one that will do well in the second half of the season," he said.