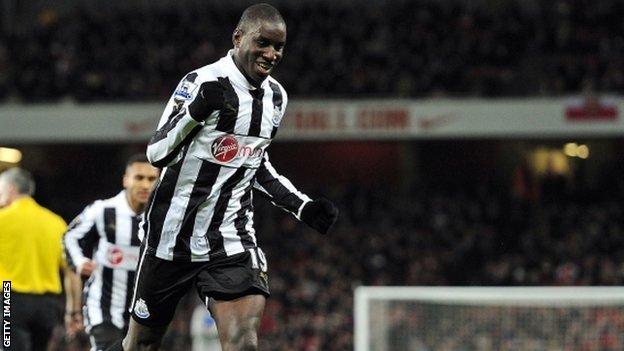 Chelsea have signed striker Demba Ba from Newcastle on a three-and-a-half year deal for an undisclosed fee.

It is believed Ba's contract with the St James' Park club contained a clause allowing him to speak to other clubs in the event of a £7m bid.

"It feels good to be here, I'm very happy and very proud," the 27-year-old told the Chelsea club website.

"It was important for me, and for Newcastle, to get my future sorted and now we can move on."

The Senegal striker added: "Now they have the whole month to buy someone. Now I am here I just need to get settled in.

"When the club who won the Champions League wants you, the decision is very easy. This club is massive and that's something that helped the decision a lot. It was not a hard one."

Ba, who moved to Newcastle from West Ham in June 2011, replaces Daniel Sturridge, who left Stamford Bridge to join Liverpool this week.

The new signing will be eligible for selection for Saturday's FA Cup match at Southampton and the Capital One Cup semi-final against Swansea, but is not available for Chelsea's Europa League campaign, having appeared in the competition for the Magpies.

Ba has scored 13 league goals for the Magpies this season. His arrival will help alleviate the burden upon £50m frontman Fernando Torres.

The 28-year-old Spaniard has scored 14 goals this season, although just seven have come in the league.