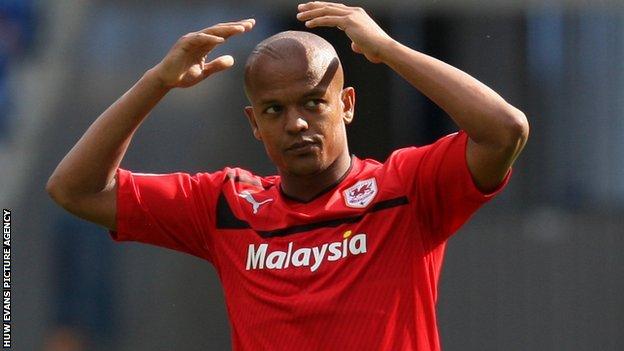 Cardiff City striker Rob Earnshaw is to return early from his season-long loan with Israeli side Maccabi Tel Aviv.

But Bluebirds manager Malky Mackay says the 31-year-old Wales striker is unlikely to get any first-team games on his return.

And there is a possibility Earnshaw could be moved on in the January transfer window.

"I would imagine he will be looking to get games which is not something he is going to get [here]," said Mackay.

"I'm pretty sure him and his agent will be working hard this month to get something moving for him [at another club].

"He will come back and he will be part of my group, but I imagine he will be trying to get out again.

"It appears that the Israeli team are sending him back. I think he wanted to stay over there until the end of the season but it was not to be."

Despite Earnshaw's experience he would struggle to come into Mackay's plans, with Cardiff City seven points clear at the top of the Championship and at least four other strikers ahead of him in the Bluebirds' pecking order.

Earnshaw had been expected to stay in Israel until the end of the season after being loaned out in September.

But Earnshaw refused to go into details about the reasons for his return.

"I don't want to go too much into what, who, where. I'm coming back and that's it," he told BBC Radio Wales.

But he did say on the Maccabi Tel Aviv website: "Due to certain circumstances and some family reasons I have to go back to Cardiff."

Although Mackay suggests Earnshaw is all but surplus to requirements, the 58-cap Wales striker said he would be coming back from Israel in good form and hoped to return to the Cardiff line-up.

"I said before I came to Tel Aviv I never thought about not playing for Cardiff City again," Earnshaw insisted.

"We'll have to see what happens but I will be looking to get involved. I'm ready, I'm fit and I feel great.

"I'm happy to be coming back. Cardiff have agreed to take me back.

"I'm in a very good position because I've been involved in quite a lot of games [with Maccabi]. I'm very fit right now and I have been scoring goals as well."

Earnshaw, who has played 58 times for Wales, rejoined hometown club Cardiff in July 2011 on a two-year deal after coming out of contract at Nottingham Forest.

Meanwhile, defender Ben Nugent has signed a new three and a half year contract with the club. The deal will keep the 20-year-old at the Cardiff City Stadium until the summer of 2016.