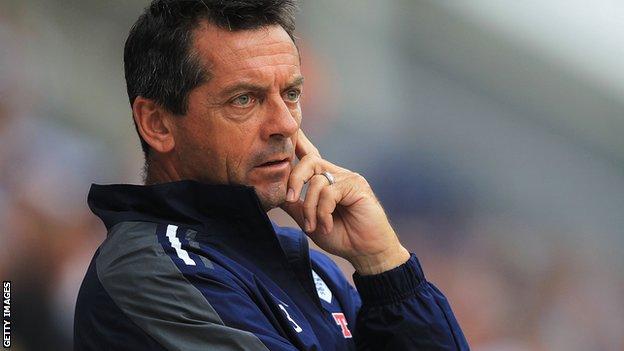 Former Hull City and Preston boss Phil Brown is interested in taking on the role of Plymouth Argyle manager.

Brown, 53, has been out of work since being having previously led Hull City to the Premier League in 2008.

"I am interested in the job, along with other vacancies," Brown told BBC South West Sport.

"I'm also interested in talking to the Argyle chairman James Brent about where he would want to take the club. "

Argyle, who are two points from the bottom of League Two, after a

Former Wolves and Walsall boss but Argyle say they will

"If his (James Brent's) ambitions match my own, then I think we will have a good footing from which to go forward," said Brown, who was under consideration for the role of Hartlepool first-team coach in November before talks broke down.

"Many clubs in the lower divisions don't match the criteria that I lay down for my own aspirations.

"However, it seems that Plymouth can achieve what I want to achieve in football, as long as a structure is put in place which we can adhere to and bring success to the area and supporters.

"It was the same scenario at Hull City when I took over, although they had started their ascent up the Football League.

"If I can do the same again, with a chosen club, then I'll be doing something right."