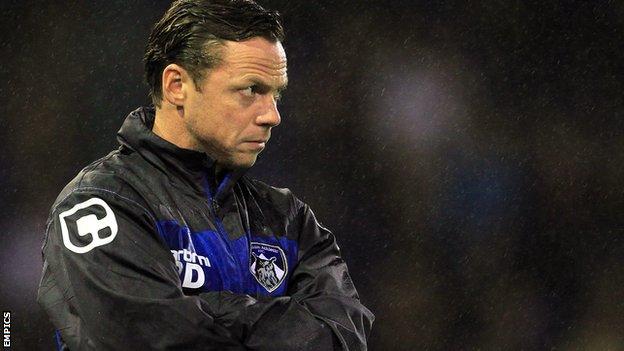 Manager Paul Dickov is keen to give Oldham supporters something to cheer when his side take on Nottingham Forest in the FA Cup third round.

The Latics have endured another inconsistent campaign in League One - they currently lie 19th in the table.

"Nobody knows more than me the disappointments that we've had at times this season. To be able to give them the day out at Forest is great."

Dickov insisted his team would not be going to the City Ground with a defeatist attitude.

He added: "We don't just want to go there for a day out. We want to be in the [fourth round] draw on Sunday.

"We go into every game believing we can win it. I believe we've got really good players, and on the right surface against other good players, you never know what can happen.

"Financially, it was really important that we got to the third round. We've got there, which takes the pressure off us a little bit."

Meanwhile, chairman Simon Corney has given his backing to Dickov, after three of his backroom staff - Gerry Taggart, Lee Duxbury and Paul Butler - were prior to the New Year's Day draw at Scunthorpe.

Corney told the club website: "It's a shame because they're all very good guys.

"As we know, it's a results-driven business and results weren't what we wanted or expected. Therefore, we needed to make changes and have done so. Whether or not it has the desired effect, we're going to find out.

"We have a lot of faith in the manager still. I'd like to see Paul succeed and I'd really like him to have every possible chance.

"He knows that and pretty soon, but that's the nature of football."