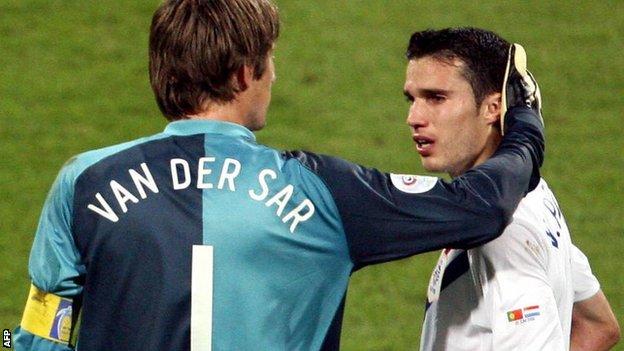 He said the Gunners have a similar philosophy to Dutch side Ajax, where he is now sporting director.

Van der Sar also told the BBC's World Football programme that he encouraged compatriot Robin van Persie to move to United from Arsenal in the summer.

Can Arsenal afford to lose Theo Walcott in January?

"Surely an early statement of intent would be swiftly securing the deal that ensures Walcott does not follow the likes of Cesc Fabregas, Samir Nasri, Alex Song and Robin van Persie out of the door?"

"It's a club used to winning titles and the last eight years Robin hasn't won that much at Arsenal."

Van der Sar said Van Persie's departure from Arsenal, together with those of Cesc Fabregas and Samir Nasri before him, means that the Gunners now fulfil the role of developing talent from which others benefit.

"I love the style of football and even the philosophy of Wenger with the young players," he said.

"We've got a similar feeling at Ajax. We want to educate them in a certain way to learn how to play good football and attacking football.

"At a certain time in their career, they want to look somewhere else. They need to go abroad to a bigger league.

"This has happened at Arsenal also over the last couple of years. A lot of players went and became even bigger players at other clubs."

Van der Sar, who played 186 times for Sir Alex Ferguson during those six years and won the league four times and Champions League once, has rejoined some of his former team-mates at Ajax.

Mark Overmars and Dennis Bergkamp are both coaches, while Frank de Boer has won back-to-back Dutch titles as manager.

All three, as well as Patrick Kluivert, Clarence Seedorf and Van der Sar himself, went on to glittering careers at Europe's biggest clubs.

Ajax's 20-year-old Danish playmaker, Christian Eriksen, is anticipated to be the next starlet to tread that path.

Van der Sar added that he had a "good chat" with Van Persie, 29, before his £24m move in August. The striker has since score 19 goals for the Premier League leaders.

"For Robin, at this age to leave Arsenal was a big decision for him and it's working out perfectly for United," he said. "It's a stable club, a great set of fans, the dressing room is a close-knit community."

World Football brings listeners up to date with the issues, stories and passion behind the world's most popular sport every Friday on the BBC World Service. You can download the podcast here.