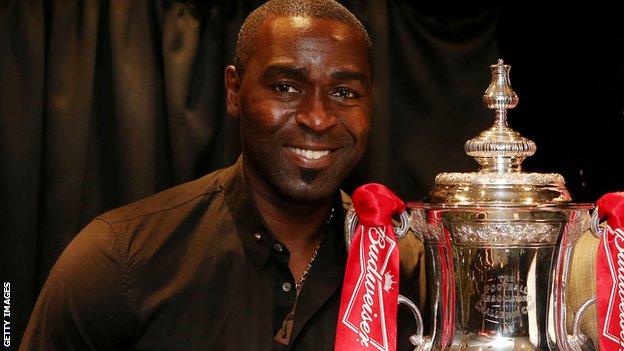 Blackburn are searching for their third permanent manager of the season having first sacked Steve Kean, and then Henning Berg after 57 days in charge.

Reserve-team coach Gary Bowyer will remain in caretaker charge until the end of January but Cole believes the club needs leadership in the boardroom.

"I can't actually get my head around the situation," Cole told BBC Sport.

"I had a great time at Blackburn, it is a proper old-fashioned football club but to see the club where it is now is crazy, absolutely crazy."

Cole joined Blackburn from Manchester United in 2001 for £8m, scoring the winning goal in the League Cup final in his first season and going on to score 37 goals in 100 appearances. Much has changed since then with Blackburn's owners, Indian poultry giant Venky's, attracting widespread criticism since buying the club in November 2010.

Their two-year reign has seen the club go from the top half of the Premier League to the bottom half of the Championship, and Cole has called on them to bring the pride back to Ewood Park.

"I know the owners fitted the criteria to buy the club but now they have brought in someone they call a global advisor, although I don't know his footballing prowess but someone needs to address it or the club could be in free fall," Cole added.

Blackburn have been without a manager since dismissing Berg on 27 December but Sean O'Driscoll, who was sacked as Nottingham Forest manager a day earlier, is understood to be among the names being considered by global advisor Shebby Singh.

"When Steve Kean was sacked the club was in third, then they brought in Henning Berg," Cole added.

"I played with Henning, he was there for 10 games - I don't know how you are meant to implement your plan for a football club in 10 games, but he got sacked."

Bowyer has lifted the club with two successive league wins since Berg's dismissal and Cole believes his friend can lead Blackburn away from trouble. "Gary is a good friend of mine and someone I played with as a kid," he added.

"He has won two games on the bounce and has been given until the end of January but I am not sure this is a football club that actually knows where it is going. But fingers crossed hopefully they can turn in around. Gary is a good man."

Former England manager Sven-Goran Eriksson is another name to have been linked with the post but the Swede has distanced himself from the reports.

"They are rumours, they are nothing real," he told BBC Sport. "I haven't been contacted by Blackburn at all so I don't know what they are doing. So it's speculation and rumours."