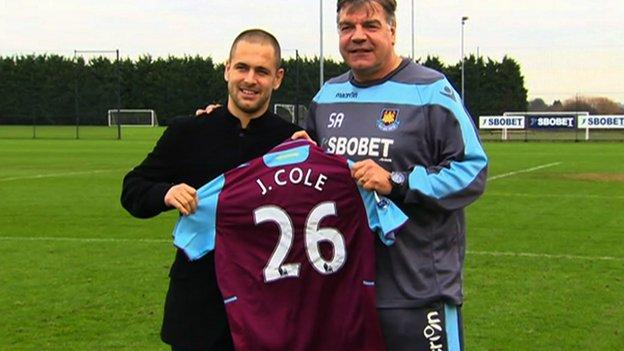 Joe Cole can play for England again if he thrives at West Ham, according to Hammers boss Sam Allardyce

The 31-year-old midfielder, who has 56 caps but last played for his country in 2010, rejoined the east London club on a free transfer from Liverpool.

Asked if he could play for England, Allardyce said: "I don't see why not.

"If he can recapture his old form and plays on a regular basis for us Joe is bound to get a bit of interest from [England boss] Roy Hodgson."

Cole spent last season on loan at French club Lille after struggling to impress at Anfield following a free transfer from Chelsea in 2010.

"I am buzzing to play and make my debut again," said the midfielder, who is set to start for the Hammers in their FA Cup third round tie at home to Manchester United on Saturday.

Cole was in England's 23-man squad for the 2010 World Cup but only made two substitute appearances.

At the previous World Cup four years earlier, he earned a man of the match award when scoring a spectacular volley and providing an assist in the 2-2 draw with Sweden.

Cole admitted he had not ruled out trying to make the tournament for a third time, at Rio in 2014.

"I will always harbour those ambitions because I love playing for my country," said Cole. "Let's get playing first. I think I will need three to four games to get to my top level."

Allardyce said Cole, who joined Chelsea from West Ham for £6.6m after the Hammers were relegated in 2003, can rejuvenate his career.

"There is still an awful lot of football left in him, and Joe feels he needed a break somewhere and to recreate himself," he said.

And the player said being near his family was an important factor in choosing West Ham ahead of a reunion at QPR with his former Hammers boss Harry Redknapp.

"Harry gave me my first chance and I'll be forever indebted to him. It was just a case that I wanted to be close to my family and when West Ham came in it was too much for me not to say no," he said.

Cole said he was "haunted" by West Ham's 2003 relegation on 42 points, in a side which also included Jermain Defoe and Glen Johnson.

"You want to come back and put things right," he said. "It is a new club I have come back to. It is so organised and efficient and a lot of work is going on behind the scenes. It has been an eye-opener.

"I just want to be involved in this club going places with the [anticipated move to the] Olympic Stadium and the job the gaffer has done."