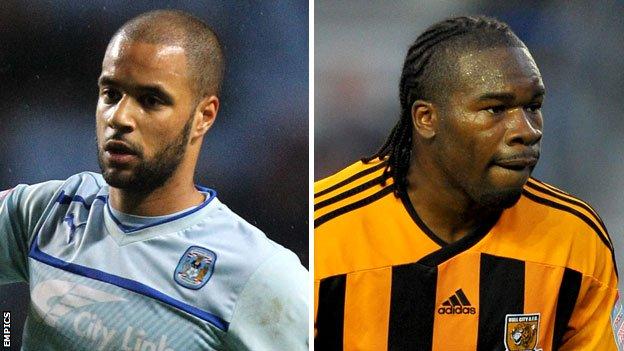 Ipswich Town have signed Nottingham Forest's David McGoldrick and Hull City's Aaron McLean on loan until the end of the season.

The 25-year-old forward scored 18 goals in 25 games during a loan spell at Coventry this season and is the top scorer in League One with 16.

Fellow striker McLean, 29, has netted three in 16 appearances this term.

Neither player has made an FA Cup appearance this season but Town are waiting to find out if they registered the pair in time for Saturday's third round tie at Aston Villa.

"He was the leading scorer in League One with 16 goals so we are signing a player at the top of his form," Town boss Mick McCarthy told the club website.

"He's a good player who we have been watching and it's a deal that we are looking to lead to a permanent one.

"Aaron is also a good addition to the squad. I tried to sign him for Wolves a long time ago so I know about his qualities."

The signings will raise doubts over who went back to parent club Queens Park Rangers this week after scoring 10 goals in 16 games during a loan spell at Town.

McGoldrick's only Forest appearance this term came in a 4-1 League Cup defeat by Wigan in August before he was loaned out to the Sky Blues, where he had netted five in his last five appearances before returning to the City Ground.

Coventry had hoped to keep the front man after his loan expired on New Year's Day.

He arrived at Forest in a £1m move from Saints in 2009 and has gone on to score eight goals in 63 league games, 32 of which were as a substitute.

McLean joined Hull from Peterborough United at the start of 2011 but has found the target only nine times in 49 league starts. He has not played since 1 December.

His spell at Posh was much more fruitful, tallying 83 goals in 186 games.