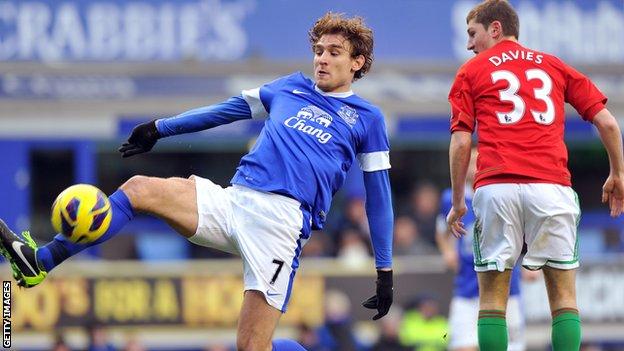 Everton's hopes of qualifying for the Champions League suffered a setback as they were held to a goalless draw by Swansea City at Goodison Park.

The Toffees carved out a string of chances against the Capital One Cup semi-finalists but failed to score for the first time in 19 league games.

Everton will hope this result does not come back to haunt them. They created countless chances but were unable to find the net on a frustrating afternoon. Swansea, who were inspired by Michel Vorm, Ashley Williams and Chico Flores,dug deep to secure a hard-earned point.

But while the £2m signing from Rayo Vallecano looks set to break into his national side next month, Everton have their work cut out if they are are secure a top-four finish.

Despite keeping a first clean sheet in the league for four months, David Moyes' side paid the price for failing to take their chances on a frustrating afternoon for the hosts.

Everton dominated Swansea in the last meeting between the teams in September and the Merseyside club once again bossed the opening exchanges with Jelavic having three chances in the opening 15 minutes alone.

The Croatian international was denied by Vorm as early as the third minute, the Swansea keeper reacting well after his side had carelessly gifted possession just outside his penalty box.

Vorm then raced outside his area to block a follow-up by Anichebe, before a mis-kick by Jelavic bounced narrowly wide after the former Rangers striker had connected with Pienaar's teasing delivery in the ninth minute.

After Jelavic went close with a glancing header, Vorm again came to Swansea's rescue when the Dutch keeper took the sting out of Anichebe's goal-bound header which allowed Ashley Williams to clear off the line.

It was all Everton but Michu delivered a sharp reminder that Swansea, fresh from their Capital One Cup heroics at Chelsea, were still very much in the game.

In front of his national manager, the 26-year-old let fly from an acute angle, following a delightful ball from Nathan Dyer, which Tim Howard flicked onto his bar for what was the Everton keeper's only serious save of the first half.

Everton had scored in the last 18 Premier League games yet they continued to squander chances after the interval.

Swansea dug deep to stretch their unbeaten league run to five matches and will head for Wednesday's FA Cup third-round replay at Arsenal in high spirits.

"We're a bit frustrated but Swansea did a really good job in midweek on Chelsea, not dissimilar (to this).

"We needed to play a bit better, pass it a bit quicker and be a little bit cleverer in the final third.

"We had three or four good opportunities, but just not perfect (ones).

"Swansea have had a busy week, a hard week, and it is a great point for them. We're just disappointed we couldn't turn our opportunities into goals."

"To come here and play Everton in such a difficult away game, after playing in midweek against Chelsea, and to get a point is a great result.

"Once more, it was a great performance, although maybe getting the points in a different way that we are used to."