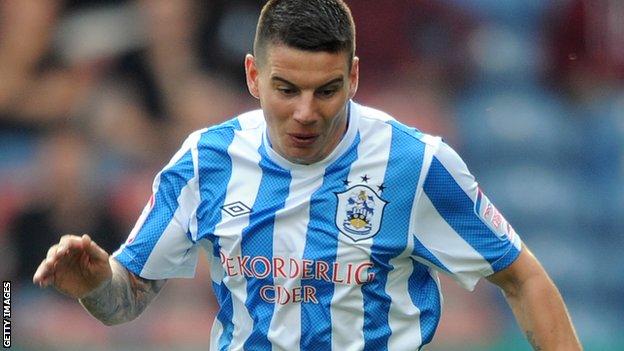 Clark, who was sacked 11 months ago by the Terriers, looked set for a winning return to West Yorkshire as Callum Reilly fired in from 10 yards shortly before half-time.

But Hammill levelled in stoppage time, curling a shot beyond Jack Butland.

The point moves Huddersfield up to 17th, while Birmingham are five points clear of the bottom three in 20th.

Despite failing to win any of their previous 11 league games, Huddersfield are unbeaten at home against sides in the bottom half of the Championship

The game got off to a relatively lacklustre start, with neither side creating anything of note in the opening 20 minutes.

Huddersfield had the first effort on goal midway through the half as Sean Scannell's acrobatic effort from debutant Neil Danns' cross was denied by Butland.

The home side failed to build on that momentum though, and instead it was Birmingham who dominated the remainder of the opening period.

The visitors opened the scoring on the stroke of half-time when Chris Burke's cross was headed into the path of Reilly, who smashed the ball into the net.

Butland was eventually beaten in the 93rd minute when Hammill, in the final game of his loan spell from Wolves, struck from 12 yards.

"I have not spoken to Dean Saunders at Wolves about Adam Hammill yet. I will speak to him after the weekend and see what he wants to do.

"If that is his last action for Huddersfield then it is a brilliant way to go out. He kept the ball alive and had three players around him. It was a fantastic goal.

"We have an honest bunch of players out there. They will make mistakes, but they are honest and will keep working very hard. That is another very valuable point for us."

"I am gutted about the result. The key for us is to kill teams off.

"When you are 40 seconds away from the end and you concede an equaliser it is a kick in the guts and we have to bounce back.

"We are playing a brand of high-tempo passing football that I like to play. If we keep playing like that then we will get the rub of the green."