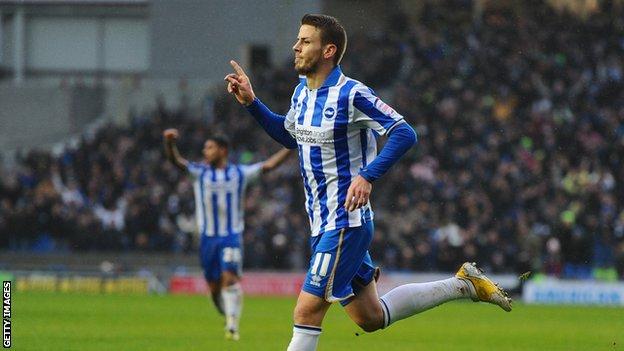 Brighton secured back-to-back league wins for the first time since September after goals by Ashley Barnes and Andrea Orlandi sentenced Derby to defeat.

Barnes gave the hosts the perfect start after good work by David Lopez allowed him to score from close range.

Spanish midfielder Orlandi doubled the lead with a powerful header following a cross by Inigo Calderon.

Jeff Hendrick netted a consolation for Derby, who have now lost three of their last five league games.

The hosts would have won by a bigger margin but Adam Legzdins did well to block Will Buckley as the Brighton player looked set to score a third for his side.

Brighton are three points behind sixth-placed Watford in the Championship table.

Barnes scored with the game less than 80 seconds old after Lopez picked out a low pass which allowed him to tap home.

Brighton have made a 100% winning start to 2013. This was their second straight win of the calendar year while Gus Poyet's side defeated Newcastle in the FA Cup 2-0 on 5 January

And it went from bad to worse for Derby.

Lopez teed up Calderon to whip in a cross from the right for Orlandi to net his second goal in as many games.

Hendrick set up a grandstand finish after the 20-year-old got a touch to Jamie Ward's free-kick to divert the ball past Tomasz Kuszczak.

"To come back with three wins is down to the players.

"We took advantage of the situation in our FA Cup game against Newcastle and need to keep going.

"It's up to me to manage the squad well and keep us strong."

"We had two inexperienced 20-year-olds at the back and didn't have the experience that Brighton had in their side.

"I didn't see too many teenagers in the Brighton side and their players know their jobs and know the game.