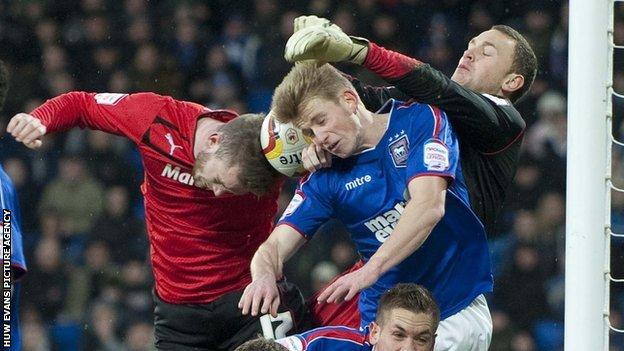 Championship leaders Cardiff City dropped points at home for only the second time this season as Ipswich stood firm in a flat goalless draw.

Craig Bellamy wasted the home side's best chance when his hesitation in front of goal allowed Ipswich to clear.

A well-organised Ipswich side rarely looked troubled by the hosts, who had previously scored in every home game this season.

Their unblemished record on their own patch was only ended in mid-December by Peterborough, and another side battling against relegation managed to frustrate Malky Mackay's pacesetters.

Ipswich arrived in the Welsh capital with the worst away defensive record in the Championship, having conceded 27 goals in 13 outings.

But Cardiff has been a happy hunting ground for the Tractor Boys over recent seasons and they started showing the confidence of their four unbeaten visits and their recent rival under new manager Mick McCarthy.

N'Daw capitalised on time and space to begin to dictate in midfield, and Cardiff were fortunate to see his long-range drive crash against the post with goalkeeper David Marshall beaten.

Peter Whittingham, returning from a knee injury, did more than most to try to stir Cardiff from their first-half slumber.

His teasing, curling cross was inches away from Craig Noone at the far post and then a trademark free-kick threatened the top corner.

Noone turned provider early after the break when his reverse pass allowed Bellamy to beat Ipswich's offside trap.

But a moment's hesitation by the Wales striker was enough to allow Luke Chambers to track back and clear.

Ben Turner and Aron Gunnarsson headed over for the home side but they failed to create a clear chance against Town's stubborn back four.

And late Ipswich pressure saw Marshall pushing away another shot from N'Daw before Nouble failed to keep his effort on target as Cardiff were caught on the break seconds before the final whistle.

"We were playing against a team who are right at the top of the form table with a new manager and some new players coming in.

"They'd only lost two in 10 so if we had not worked as hard as them then we'd have been beaten.

"For us to come out with another clean sheet, our fourth in five games, on the back of 13 points out of 15, I'm delighted."

"It was probably a fair result overall. I would have taken it before and I'm happy with it now.

"On reflection we might have got all three points. In open play I think we probably had the better chances in the second half.

"I'm still looking behind me. Whatever we've done so far it can change so quickly. We'd lost two on the bounce and I didn't want to lose three league games on the bounce."