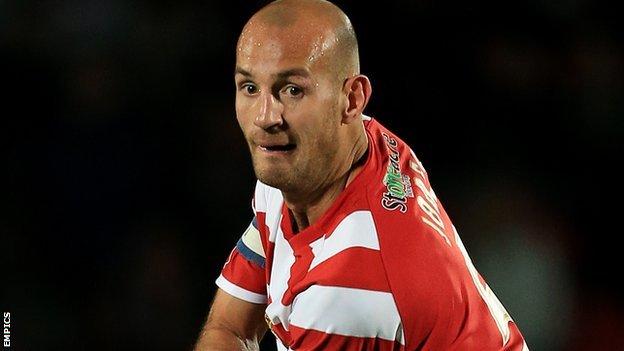 Rob Jones scored a dramatic injury-time winner as Doncaster Rovers came from behind to beat Stevenage and ensure they stay level on points with League One leaders Tranmere Rovers.

The hosts, who saw boss Dean Saunders depart this week, trailed when James Dunne fired a stunning 25-yard volley into the top corner of the net.

But Iain Hume drew Rovers level when he shot in from close range on 79 minutes.

Rovers now have not lost in their last 12 away league matches, breaking a club record that has stood since 1947.

"Honestly it's heartbreaking given the performance.

"I thought we competed and, in most cases, out competed a very strong side.

"I think we've been undone by a bit of poor officiating for the first goal.

"The (Doncaster) centre-back should go off and we should be a man to the good."

"From start to finish the performance was very good, and the finish was exceptional.

"To end the game in such a manner was credit to the players. Their fitness levels are fantastic and that showed towards the end of the game.

"It's another record and I am pleased to be involved with that. They are a good bunch, they've been a credit this week to work with and they will get better as well."

Stevenage defender Jon Ashton may feature in the squad after being sidelined since September with an Achilles problem.

On loan strikers Steve Beleck and Sam Hoskins could start, but boss Gary Smith is unlikely to make changes.

Doncaster will be led by Brian Flynn and skipper Rob Jones after manager Dean Saunders left to take over at Wolves on Monday.

Rovers will be without striker Billy Paynter who is suspended.