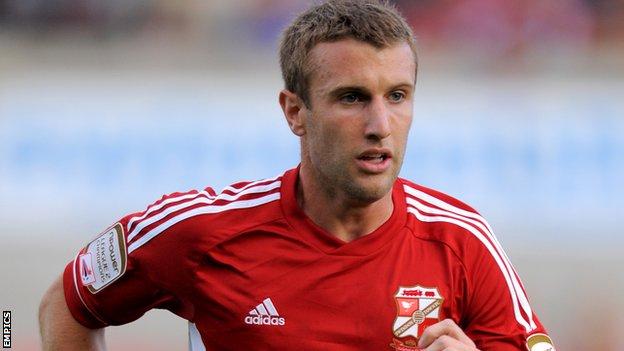 Bournemouth survived a strong fightback from fellow promotion hopefuls Swindon Town - and a half-time pitch inspection - to match a club record and go 18 games unbeaten in all competitions.

Harry Arter put the Cherries ahead before the break with a 20-yard strike.

But with the rain lashing down, Swindon grabbed a late equaliser.

Home keeper David James slid out of his area to clear, and Andy Williams controlled the ball before curling a left-foot shot into the empty net.

Striker James Collins had earlier missed a great chance for the visitors after defender Steve Cook slipped and James was left stranded, but Collins skewed his shot wide with what looked like an open goal at his mercy.

The interval was extended by five minutes to allow the ground staff to work on the Dean Court pitch, but referee Phil Gibbs deemed it playable.

Both play-off rivals struggled in the wet conditions, as passes went astray, tackles went flying in, and Robins manager Paolo Di Canio cut an increasingly frustrated figure on the touchline.

Swindon winger Matt Ritchie - a transfer target for Bournemouth last season - drilled in a low left-foot shot which James saved with his boot, while the former England stopper also had to be alert to save Chris Martin's close-range effort.

At the other end, Wes Foderingham kept his side in the game by getting down low to smother Lewis Grabban's header.

But Swindon finished the game as the stronger side.

And after Williams levelled with five minutes remaining, they almost won all the points with the last kick of the game when a deflected free-kick flashed past James's left-hand post.

"It was a really good match up until the heavens really opened after about 30 minutes, it was end to end, two teams really going at each other.

"I think the conditions really ruined the game which was a real shame from our perspective being a football team. It was difficult to play our normal game, we had to slightly adjust and I think that played into their hands.

"In difficult conditions I thought, in the main, we defended really well."

(On Swindon) "They put a lot of balls in the box, they ask questions of you; I think they're a very good side, I think they're very well organised and it was a really good test.

(On poor weather and the possibility of the game not finishing) "At one stage (thought match may not last the 90 minutes) thankfully it did, I think the referee had a difficult call to make at half time, we were 1-0 up and obviously wanting the game to carry on and I think he was in slight doubt as to what to do.

"It's a fantastic point, an important one against one of the best sides in this league.

My lads were amazing, they did a fantastic job.

"Today is an important signal for me because a few weeks ago we would lose this game.

"This is a real group now."