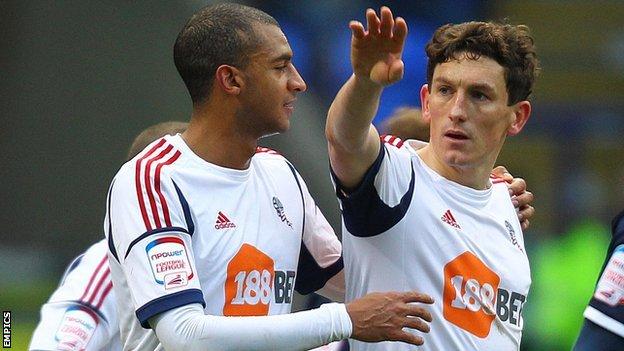 Bolton earned a point against Millwall courtesy of a Keith Andrews penalty.

The promotion-chasing visitors had themselves taken the lead from the spot after Andy Keogh chipped in from 12 yards following a foul by Zat Knight.

Forde impressively saved a Marcos Alonso shot late on before Kevin Davies had a header cleared off the line at the other end by Danny N'Guessan.

Following their first ever visit to the Reebok Stadium, the Lions are two points shy of the play-off places.

Bolton's chances of mounting a late challenge for promotion, meanwhile, are looking increasingly unlikely as they are 10 points away from the top six.

The home side had only themselves to blame for going behind, though, as Millwall's Liam Trotter seized on Tim Ream's poor pass before releasing Keogh.

The striker had his heels clipped by Knight in the area before picking himself up and nonchalantly converting the inevitable penalty.

Shittu's clumsy challenge on Lee let Andrews reply for Bolton after 34 minutes before the hosts had stifled appeals for handball against the Millwall defender waved away.

Bolton applied some late pressure for a winner but to no avail as Alonso had a shot saved by Forde, a Davies header was hacked clear and substitute Marvin Sordell sent a shot wide.

"The players showed tremendous effort throughout that performance and that was the most pleasing thing for me.

"If I have any criticisms we were a bit wasteful and our decision making wasn't good enough.

"I think when the goal went against us made us up the tempo and I felt in the second half we gave everything we had."

"We had a bit of a threat on the break but overall we have got four points out of six against Bolton which is great against a team that have come down from the Premier League.

"The first half we played well and caused Bolton problems. In the second half it was a rear-guard action from us and we defended well for long periods.

"In terms of the table and where it leaves us we are still in there with a shout."