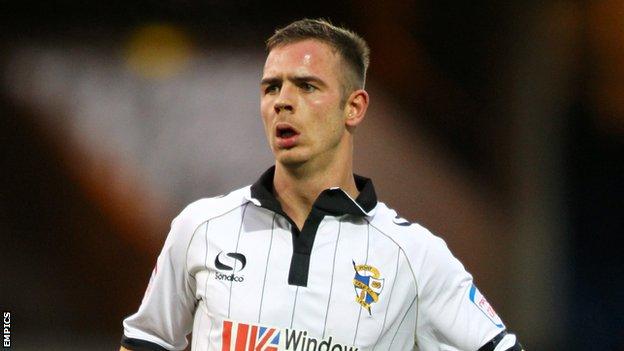 Port Vale leapfrogged Gillingham to move to the top of League Two with a victory at the Priestfield Stadium.

Vale started the game two points behind the Gills, and went ahead when Tom Pope headed home Adam Yates's cross for his 26th goal of the season.

The visitors were 2-0 up when Adam Barrett turned into his own net under pressure from away debutant Lee Hughes.

Danny Kedwell's strike from the edge of the box reduced the deficit, but Gills could not find that elusive equaliser.

Vale also had goalkeeper Chris Neal to thank after he somehow managed to keep out Charlie Lee's thunderous header.

And the away side clung on to claim three points at the Priestfield Stadium, where they had only won just once in their last 16 visits prior to kick-off.

"I was disappointed not to get anything, it was a terrific performance second half and we couldn't get the equaliser, but you don't want to be 2-0 down in the first place.

"We had a lot of opportunities, a lot of crosses that were good. Sometimes you just need someone to take the break, that chance, but away from home we've done that, so let's not hand out any criticism.

"It's just unlucky we didn't get another chance in the second half, but we don't want to give those goals away at Priestfield because it knocks you back.

"The winning team only gets three points, but if we'd won we would have been five points clear with a game in hand and that would have been significant. We have got to learn and we have to improve what we do here."