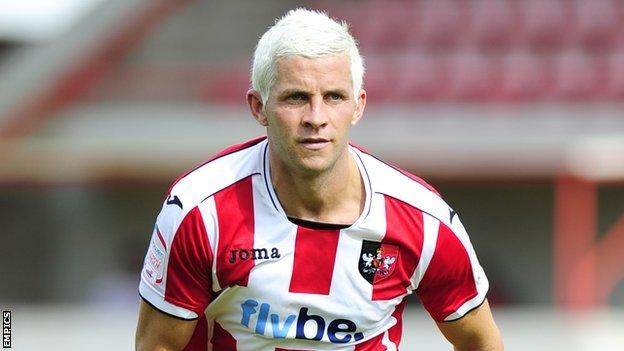 The visitors were denied when Barry Corr saw his header cleared from under the bar - the striker's claims the ball had crossed the line were waved away.

O'Flynn put Exeter in front with a crisp finish from the edge of the area.

And the Grecians sealed a third straight league win when Scot Bennett looped in a header and O'Flynn converted Jimmy Keohane's cut-back.

The Shrimpers just about remain in the play-off places, staying above Fleetwood and Bradford on goal difference.

"We stuck to the basics and scored some really good goals.

I loved the final goal with Jimmy Keohane showing that selfless attitude to set his team-mate up. Very few players would've done that. It really shows a classy player.

"We're always trying to improve the details - all the things that in isolation you don't pay much attention to but you stick them together over weeks and months, and hopefully we start to put results together.

"I was sure of my substitutes today, I knew what I wanted to get out of them."

"[I am] very disappointed. Our first-half performance, I thought we put a lot of opportunities in the box but didn't get on the end of them.

"We lost a bad goal, two minutes from half time. Had we scored first it may have been a completely different game.

"The second half was a weary looking team trying to chase the game and it's cost us dear, we lost two bad goals.

"We need a hand. There are two of three positions we really need to strengthen. We lost two in (Scott) Donnelly and (Tamika) Mkandawire, and we've got (Britt) Assombalonga injured as well."