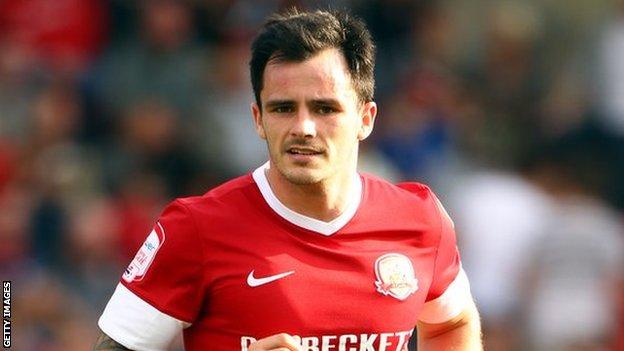 A dominant performance from the relegation-threatened hosts was rewarded as Dagnall scored a penalty after he was fouled by Sam Byram.

Dagnall continued to torment the young Leeds full-back and Byram was at fault again as the 26-year-old burst past him to fire a low shot past Paddy Kenny.

Chants of "Time to go!" were aimed at boss Neil Warnock by angry Leeds fans.

Both Terry Butcher and Sean O'Driscoll had turned the vacant Barnsley job down in the last seven days, but this result saw caretaker boss David Flitcroft claim his second successive win.

The Tykes began sharply and tested visiting goalkeeper Kenny with a deflected strike from Jim O'Brien within two minutes.

This was followed by a penalty shout from Stephen Dawson when he appeared to be fouled by Leeds striker Luciano Becchio.

Barnsley continued to pile on the pressure, with Harewood then striking the foot of Kenny's right-hand post as he cut inside from the left.

The start of the second half saw a brief improvement for Leeds as Barkley dragged a 25-yard shot wide, before the Everton loanee then hit the crossbar with a powerful drive from six yards.

The momentum soon swung back in Barnsley's way, however, thanks to Dagnall's deserved double.

The result sees Barnsley move off the foot of the table, while Leeds slip five points behind the final play-off spot.

Barnsley caretaker manager David Flitcroft, talking about his future: "I have found out a lot about myself in the last 10 days, it could change the way I look at myself for the rest of my career as when you lead a group and they are all playing for you, it's different.

"If I get sacked, I get sacked, but I've been taught well and you don't walk out on people. I told them [the players] at half-time I was excited about it [the [performance] as we overran and dominated Leeds.

"I wanted to spend some time with the players and celebrate with them after the game, especially someone like Chris Dagnall. I worked with him at Rochdale where he got 24 in a season for us and I picked some music and put the goals to it and showed him before kick-off."

Leeds manager Neil Warnock, who brought a laptop into the press conference to complain about a refereeing decision, said: "We were very poor in the first half and if I had have been one of the 5,000 I might have said what they were.

"I thought we had some great chances at the start of the second half and then there was a horrendous tackle from [Stephen] Dawson. How that's not a red card I don't know.

"I think I'm doing a great job if I'm honest and with one or two additions that I've got lined up... I understand their [the supporters'] disappointment but we know we need to strengthen."