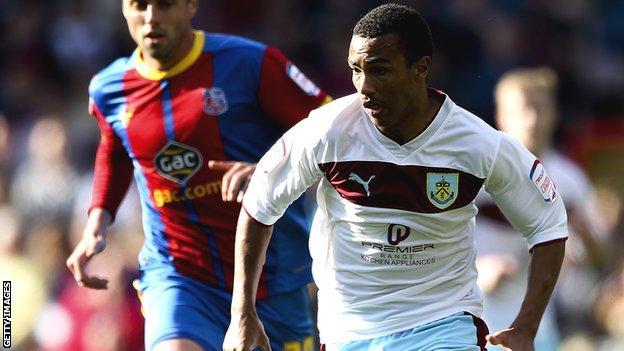 Crystal Palace saw their recent struggles continue as they were beaten at Burnley by a Junior Stanislas goal.

Although the hosts had chances early on, they needed Lee Grant to save well from Wilfried Zaha and Jason Shackell.

But just as it seemed the visitors would push on for the win, Stanislas curled a brilliant strike into the top corner from the edge of the box.

Palace pressed for an equaliser and Mile Jedinak hit the bar in stoppage time, but Burnley held on.

Stanislas on the mark

The result sees Burnley rise to 10th, while Palace drop a place to fourth and have now won only one of their last seven leagues games.

Kieran Trippier was a threat down the right and, after 24 minutes, Vokes was inches away from getting a telling touch to one of his crosses

Zaha's first real involvement saw him test Grant from the edge of the box before Dean Marney got to the byeline and pulled back for Ings, but he failed to connect properly and Julian Speroni saved comfortably.

Stanislas took advantage of some hesitation in the Palace defence, only for his half-volley from the left to fail to hit the target.

Grant then got down brilliantly to turn the ball away after Shackell had diverted Jonathan Parr's cross towards his own goal.

Vokes failed to hit the target from close range, Marney headed straight at Speroni and Zaha's shot was palmed away by Grant.

But against the run of play, Stanislas struck the winner with his last touch before being substituted.

Palace could not level, despite Jedinak's best efforts - and Burnley were able to celebrate a third win in four league games.

"I thought our football was excellent but it was a tight game and we did well to win it.

"We asked the players to give a lot in their performances and they did that once again.

"I am sure Ian Holloway will argue that Palace should have got something from the game and if you isolate the second half maybe he is right, but over the 90 minutes I think we deserved to win."

"I thought we were fantastic in the second half. The goal came against the run of play but how we haven't got at least a point I do not know.

"I think there was a spell in the first half where our positioning wasn't good enough, but that got better and we looked bright.

"We pinned them back into their half but unfortunately I thought their defence played very well."