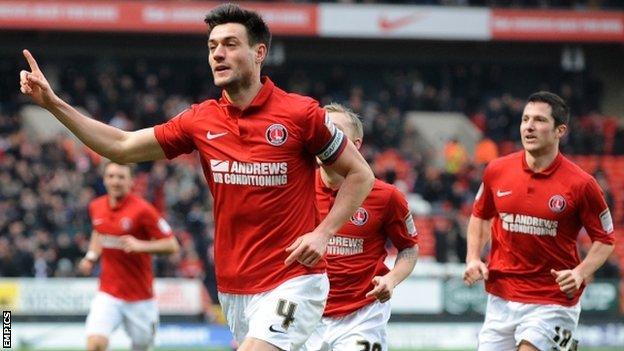 The Seasiders, who saw Michael Appleton quit to take charge of Blackburn 24 hours before the game, fell behind when Jackson's 25-yard shot bobbled in.

Wagstaff made it 2-0 before half-time when he pounced after Yann Kermorgant's header was saved.

Blackpool dominated after the break but did not reply until Nathan Eccleston drilled home in injury time.

It was a frustrating afternoon for their assistant manager Steve Thompson, who was in temporary charge following Appleton's exit.

Charlton's three previous league victories at the Valley this season were all recorded on a Tuesday night.

Veteran striker Kevin Phillips, one of those in the frame for the permanent job, missed a great chance to put the visitors ahead after just two minutes when he missed the target with a close-range header from a Nathan Delfouneso cross.

Charlton responded well and Delfouneso was involved at the other end when he nodded a Matt Taylor header off the line.

The Addicks did not have to wait long to take the lead, however, with Jackson finding the net from the edge of the area after Chris Solly's pass was deflected into his path.

Blackpool went close to an equaliser through Isaiah Osbourne and Tom Ince before Wagstaff struck in first-half stoppage time.

The Seasiders could not turn their possession into chances after the break, with Ince guilty of some wayward finishing.

So when Eccleston came off the bench to pull one back in the 93rd minute, it was only a consolation for the visitors as Charlton won at home on a Saturday for the first time this season.

"It's Saturday and we've won a game. It's been a long time coming.

"I've been saying if we can improve our home form just a little bit we could have a better position in the league.

"The fans come to the Valley and want to see their team do well to set up their week, and we've done that against a decent Blackpool team."

"You try not to give players excuses, but it's not the perfect scenario when yet again these lads are coming in and there is no manager.

"The manager has worked with them for the last two months on how he wants them to play, and the next minute he's gone.

"It's my job to galvanise the players and get their belief back because they have had the stuffing knocked out of them again.

"We need someone in rapidly because January will be massive for this club."