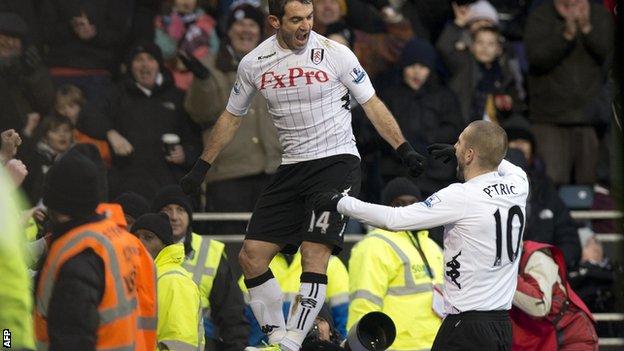 The hosts had gone ahead through Giorgos Karagounis's 25-yard strike.

But Wigan equalised when Di Santo cut in from the left wing, ran unchallenged and fired past Mark Schwarzer to lift his side out of the bottom three.

However, there was nearly late drama at Craven Cottage as Bryan Ruiz's shot was headed off the line by Maynor Figueroa to deny Fulham victory.

Fulham have still only won four home league games this season but made a bright start as Mladen Petric wasted a free-kick from just outside the penalty area and then shot over with a wild effort from a similar distance.

The game's first bit of class came from Ruiz, who delightfully chipped a pass over the Wigan defence, but Dimitar Berbatov could not collect the ball as Latics goalkeeper Ali Al Habsi gathered.

Fulham went ahead in the 22nd minute when Karagounis, who also scored from long range against Blackpool in the FA Cup last week, grabbed another as his 25-yard strike went in off the post.

The Greek midfielder's first Premier League goal meant Wigan have now gone behind in 15 of their 22 league matches this season. Of the previous 14 games in which they have conceded first, they had gone on to lose all but one of them.

But at Craven Cottage they showed their resilience as they were the better side for the rest of the match.

James McArthur's weak shot from 18 yards was straight at Schwarzer before Di Santo should have scored but wasted a chance from five yards.

This result maintains Martin Jol's record of never losing a Premier League match against Wigan as a manager.

During his time in charge of Tottenham and now at Fulham he has won five and drawn three of the eight meetings against the Latics.

In the second half, Maloney's deflected 25-yard effort was tipped onto the bar by Schwarzer, who produced a stunning fingertip save to keep his side ahead as the Cottagers clung on.

Kieran Richardson produced an excellent piece of defending when he slid in to deny Di Santo in the penalty area after a storming run forward from James McCarthy, before Maloney shot at the Fulham goalkeeper.

Di Santo, with an exquisite piece of skill, then flicked the ball up and volleyed on the turn but his shot went narrowly wide.

However, Wigan grabbed the goal their play deserved when a quickly taken free-kick allowed Di Santo to cut in from the left-wing, run unchallenged to the edge of the penalty area and blast the ball past Schwarzer for his first Premier League goal since 6 October.

Di Santo had a chance to claim all three points when he again ran at the Fulham defence, created some space and fired a low shot from 12 yards which Schwarzer did well to push wide.

Then, down at the other end, Ruiz's shot was headed off the line by Figueroa.

The point gained takes Wigan out of the bottom three and above Aston Villa into 17th, while Fulham remain 13th, six points above the relegation zone.

Fulham boss Martin Jol said: "If you are 1-0 up you have to score a second goal and we were very sloppy. We lost the ball and kept them in the game. We've had two disappointing results but we have to take it.

"I wouldn't say we're in a relegation battle but we need the points.

"We don't have all of the millions to spend but you have to be creative. Sometimes you could do with one of two quality players and hopefully we will do something."

Wigan manager Roberto Martinez said: "It's a decent point overall but I'm sure we had most of the threat and, with the amount of opportunities we had, I'm disappointed we could only get one goal.

"It's a tough place to come once you give them a goal lead. Every time we went forward we carried a real goal threat and Mark Schwarzer's save from Shaun Maloney is the save of the weekend and probably the save of the season."

On Ivan Ramis's injury [the defender was carried off on a stretcher late on], Martinez added: "I thought he was outstanding from the first minute until he had to come off.

"We fear he has damaged his ligaments in his right knee. We will have to see the scan but I fear the worst."