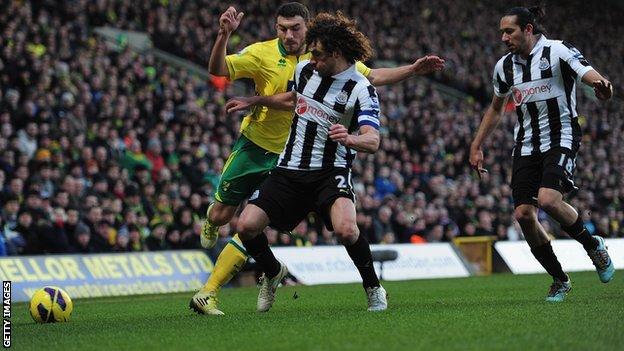 An uninspiring affair at Carrow Road ended in a goalless draw between Norwich and Newcastle.

Gabriel Obertan had a well-struck shot smartly saved by Canaries' keeper Mark Bunn but chances were in short supply.

Norwich defender Russell Martin went close in the second half, only to see his long-range shot hit the post.

Anthony Pilkington had a late chance for the home side but, after cutting inside, his 15-yard shot was saved by keeper Tim Krul.

While those at Carrow Road may not have found much solace from the match, the draw checked a run of defeats suffered by both camps.

Norwich had lost their last four league games and Newcastle, who are only two points above the relegation zone, earned their first point in four games.

The Magpies, however, remain without an away win this season and never looked like changing that statistic against former manager Chris Hughton's Norwich side.

Newcastle centre-back Fabricio Coloccini, to return to his native Argentina, did start for Alan Pardew's side, along with the club's new signing, and the visitors almost caught their hosts cold from the kick-off.

"This match will not live long in the memory. The draw halts the run of Premier League defeats from both sides. Russell Martin came closest to breaking the deadlock but in truth this was a very poor game indeed."

Canaries' centre-back Sebastien Bassong let a long ball go, only for Obertan to steal in behind him and deliver a low cross for striker Papiss Cisse which was intercepted by keeper Mark Bunn.

Obertan also had a 25-yard effort saved by Bunn but that was a rare moment of excitement in a disappointing match.

Both sides lacked any bite to their attack, with Cisse struggling to fill the void left by Demba Ba, who has joined Chelsea.

The home side's struggles were epitomised when they failed to make the most of a counter-attack which pitted three of their players against two back-tracking Newcastle defenders.

The move ended with Simeon Jackson pulling the ball back for Wes Hoolahan, who took a touch instead of shooting first time and let Magpies midfielder James Perch run back to get in a vital tackle.

Norwich hinted there might be an improvement immediately after the break when a lovely move ended with Hoolahan's cross for the in-rushing Bradley Johnson being cleared by Obertan.

There was more urgency from the home side in the second half, although Newcastle's dogged defending restricted any clear-cut chances.

The Magpies brought on key midfielder Yohan Cabaye for his first appearance for them since 11 November, while Norwich striker Grant Holt's 67th-minute introduction signalled his return from a hamstring problem.

Neither could help break the deadlock, although Pilkington did threaten a goal when he cut inside before having his shot saved by Krul.

Pilkington also went close in the final moments of the match but could not divert Holt's header across goal into the net.

"Our final ball and our delivery from set plays let us down.

"On the balance of play we were the better team but you have to score goals and we weren't able to do that.

"Certainly, in the end it was not a bad point."

"I don't want to comment too much [about Coloccini]. It's club business and we will talk to him this week."

"It was a more favourable result for us than for Norwich as they were the home side. It was two teams that worked hard and restricted the opposition.

"For us it was important to get a clean sheet. We worked hard in the week and it showed.

"I had the luxury of putting some senior players on the pitch and the result showed that. That was a key game. We have Reading at home and Aston Villa away coming up so it is an important time for us.

"Hopefully, we will bring in a couple [of new signings] because we need to be a lot stronger."