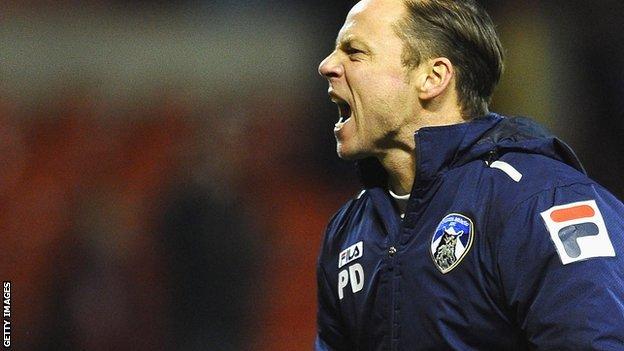 Oldham manager Paul Dickov has targeted a reunion with former club Manchester City after leading his side to a stunning 3-2 win over Nottingham Forest to reach the FA Cup fourth round.

The League One strugglers trailed their Championship hosts at the break but responded in style with three goals in seven second-half minutes.

Dickov said: "With my City connections it would be nice to meet them.

"Financially it would mean a lot to the club and it would be great for me."

The Latics were great value for their win at the City Ground, where they completely outplayed Forest in the second half despite having been second best before the interval.

"To be honest I thought we were guilty of showing Forest too much respect in the first half," Dickov said. "But I said to them at half-time, 'It's the FA Cup and if you are going to go out, don't go out with a whimper'.

"I thought we were excellent in the second half, played some great football and thoroughly deserved it. We showed great desire and got the rewards for it."

Dickov's side are 19th in League One, just five points off the relegation zone having lost four of their last five games.

And he hopes a good cup run could help him strengthen his squad.

"If we can make some money in the next round, you never know - the chairman might let me bring one or two players in as well," Dickov added.

"But for the time being we just want to enjoy today's game because I am very proud of my players for the way they came back into this game after losing an early goal."

"We were woeful in the second half," he said. "We were sloppy in everything we did and paid the penalty for it.

"We warned the players at half-time that they had to be professional in the second half but we had to be a lot better than that.

"We gave the ball away cheaply, didn't close them down quickly enough and it was all very half-hearted."