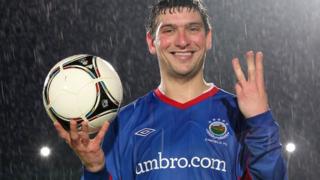 Linfield's Matthew Tipton scores a hat-trick at Windsor Park in the 5-2 victory over Coleraine in the Irish Premiership.

Tipton netted a close-range eighth-minute opener and Brian McCaul quickly made it two with a penalty after David Ogilby's foul on Michael Carvill.

Tipton made it 3-0 but former Blues player Curtis Allen pulled one back for Coleraine early in the second half.

Mark McAllister fired in Linfield's fourth, Ruairi Harkin netted for Coleraine and Tipton had a tap-in for his third goal.