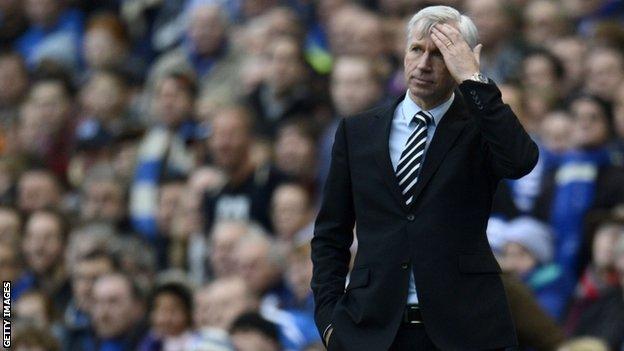 Newcastle manager Alan Pardew has conceded that his side are in "real danger" of relegation from the Premier League if performances do not improve.

The St James' Park club suffered another setback as they were on Saturday.

We need to get some bigger players back, who can handle carrying the Newcastle jersey

A series of injuries forced Pardew to field a weakened side.

"We need to get our best players back and quickly," said Pardew. "We need to sustain ourselves and make sure we're a Premier League team next season."

He added: "We want to stay there but we are in real danger and we need to get our best players out on the pitch. We're not too big to go down and we accept that."

Fabricio Coloccini and Papiss Cisse were not risked having picked up minor knocks in the midweek defeat by Everton, while the influential Hatem Ben Arfa, Yohan Cabaye and Steven Taylor are out until next month.

Cheick Tiote is at the African Nations Cup and Demba Ba has been sold to Chelsea. Newcastle are only two points above the relegation zone and Pardew warned the club must act if they are to remain in the top flight.

"We need to make sure we are a Premier League team next season. Our team today is a shadow of the team we can put out," he said.

"We know we need to get some bigger players who can handle the situation of carrying a Newcastle jersey, whether that's a signing or getting a player back from injury. It's important to spend during this month. I'd like to see another player come in through the door to join Mathieu Debuchy in the next week or so."

Pardew remains keen to bring in another striker before the end of the January transfer window. Marseilles striker Loic Remy is understood to be under consideration and for the Newcastle manager reinforcements cannot come quickly enough.

"It's difficult to get transfers in this window but we'll have to do everything possible. As Newcastle manager coming to Brighton in the third round of the FA Cup I'm aggrieved that I couldn't put out a stronger team than that.

"There are young players who have given everything there, their maximum performance. But unfortunately they shouldn't be playing for Newcastle in the third round, they should be in our development team.

"We lost Fabricio Coloccini and Papiss Cisse to slight injuries. I couldn't risk losing them because the most important thing to us is our Premier League status."