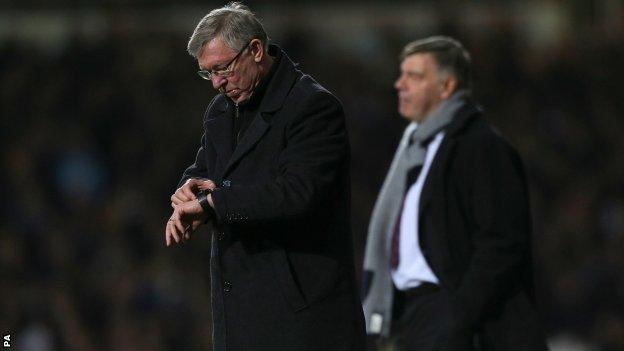 The Premier League leaders were 2-1 down after 90 minutes, but earned a third-round replay when Robin van Persie levelled in stoppage time.

"We have had some terrible draws over the years and been knocked out early and we don't enjoy that," he said.

"We missed some good chances and I thought it wasn't going to be our day."

He continued: "We had headers over the bar and [Shinji] Kagawa had one blocked on the line.

"But you have to say the pass from Ryan Giggs, and the first touch from Robin and his finish were world class," added the 71-year-old Scot.

Giggs was one of three substitutes, along with Van Persie and Antonio Valencia, introduced after James Collins had scored his second header to put the home side in front.

Midfielder Tom Cleverley had given the visitors the lead in the first half, when he guided in Javier Hernandez's cross from the right.

Collins equalised a few minutes later with a header from Joe Cole's cross. The two combined again when Cole, making his first appearance in his second spell at Upton Park, delivered another excellent cross that Collins flicked in.

"For us to be losing 2-1 in that game is amazing with the way we played," said Ferguson.

"But when you play West Ham you have got to defend those crosses and set pieces, because they are brilliant at that, the best team in the league, but we did not do that.

"Twice in the same position, [it was] James Collins from a cross by Joe Cole and we have lost two goals. But with some of the chances we missed, we should have been home safely."

West Ham boss Sam Allardyce said he knew from experience his opponents are never beaten while the game is still in play.

"You have never beaten Manchester United until the final whistle blows and I have learned that in the past," said the former Bolton manager.

"It was a great performance and in that dressing room we almost feel like we have lost when you get done in the last minute, but we are still in the hat.

"We have a difficult January now. That game gets fitted in, and we have some important league games before and after that, so we have to get the players fit who are out injured."