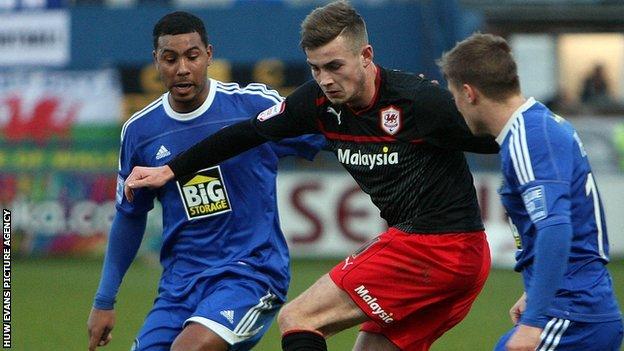 Cardiff City manager Malky Mackay said he had no regrets after his weakened team were knocked out of the FA Cup at non-League Macclesfield Town.

Mackay fielded five players yet to make a league appearance for the Bluebirds.

They were five minutes from victory but two late goals from Matthew Barnes-Homer took Macclesfield through 2-1.

"We picked a team that we felt was capable of winning the game and throughout the game they were excellent," said Mackay.

"There were some fantastic performances from the youngsters.

Cardiff's next generation on display?

"They got to five minutes to go. A little bit of lack of concentration, lack of discipline in that last five minutes lost us the game.

"It's something they will learn from. I don't regret picking this team, I think they did wonderfully."

Mackay's third-round selection gamble seemed to have paid off as his inexperienced side took the lead early in the second half when three of the youngsters combined.

Left-back Declan John played a one-two with Joe Ralls and then delivered across the face of goal for Nat Jarvis to prod home.

Having coped comfortably with Macclesfield's limited attacks, Cardiff were undone in the final five minutes, as Barnes-Homer slid in at the far post and then converted from the spot after Jarvis was penalised for a shirt-pull.

"Was it a penalty? I'm not really sure. There was a coming together of bodies but I'm still not sure," said Mackay.

Having brought on another three teenagers as substitutes, in the closing stages Cardiff had eight players on the pitch aged 21 or under.

"Cardiff lacked their usual flow but that was to be expected with so many changes. The youngsters did well. I thought Declan John was the best of all, although he did fall asleep to allow Macclesfield to equalise."

Each one showed "great courage", said Mackay, who paid tribute in particular to 21-year-old John and centre-back pairing Ben Nugent, 20, and Adedeji Oshilaja, 19.

"I thought the three youngsters at the back were exceptional," he said. "Ben Nugent showed why he's been in my first team.

"I thought Adedeji was outstanding at the back in his first run out at this level. Young Declan is someone we've moved from being an outside-right to what I see is going to be a real prospect for this football club at left-back.

"He caught the eye at Northampton at the start of the season and again showed today he's beginning to really learn how to play the position.

Having reached the FA Cup final in 2008 and the League Cup final last season, Cardiff have fallen at the first hurdle in both competitions this season.

The team beaten at Macclesfield featured seven of those that lost at League Two side Northampton, providing ample evidence that Mackay views the cups as a distraction to the priority of securing promotion to the Premier League.

And having rested so many of his first-team squad after a gruelling Christmas schedule, the manager feels he will reap the benefits in next Saturday's home league game with Ipswich Town as Cardiff look to defend their seven-point lead at the top of the Championship.

"We had five or six knocks for various people," Mackay said.

"Our first-team squad has played four games in 10 days, which is exceptional I suppose.

"So they've had a chance to recover from their bumps and bruises and be back for the Ipswich game. And I'd also say good luck to Macclesfield in the next round."