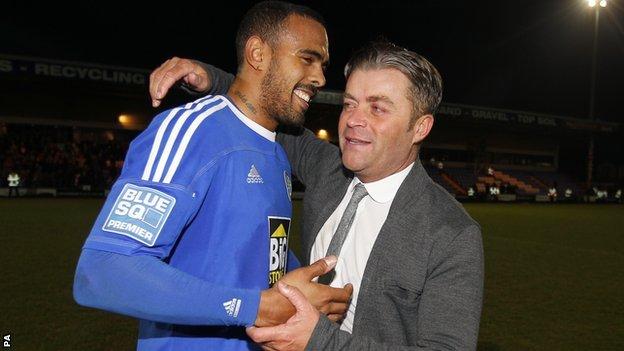 Macclesfield manager Steve King says it would be a "dream" to play Liverpool in the next round of the FA Cup.

The Blue Square Bet Premier side to reach the fourth round for the first time in their history.

"I would love to get Liverpool away in the next round," said an emotional King. "They are my team. I will take anyone but Liverpool would be a dream."

Brendan Rodgers's Reds face Mansfield in the third round on Sunday.

Cardiff manager Malky Mackay had made 11 changes to his side with promotion to the Premier League a clear priority.

They went ahead through Nat Jarvis's effort and held the lead until five minutes from time when home striker Matthew Barnes-Homer popped up at the back post to equalise.

And the Moss Rose crowd looked on in amazement when the Silkmen were awarded a penalty three minutes later, which Barnes-Homer - who has now scored 20 goals this season - tucked home to seal a famous victory.

Boss King praised his frontman's efforts and said he had no interest in selling the 26-year-old former Wycombe and Luton striker.

"Matthew is an unusual character sometimes but I know how to handle him and how to get the best out of him," said King.

"You have to know your players and how to nurture them and what their needs are. I said before the game that sometimes you won't see him and then 'bang' he'll score.

"He's not for sale and we are in the process of a new contract for him because he's earned it."

Cardiff boss Mackay said he was not too disheartened about the result after picking a young side that included nine players aged under 20 among the 11 on the pitch at the final whistle.

"I thought all the youngsters at the back were fantastic and Declan John has shown he has exceptional potential," he said.

"We have a dressing room of very disappointed players but they should be proud of the performance they put in.

"They got to five minutes to go and they just switched off and that lost us the game - but they will learn from that."