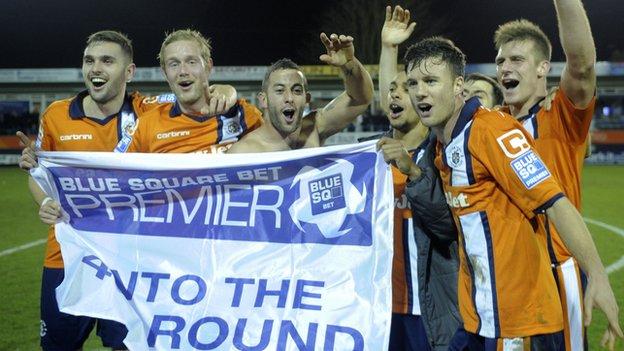 Wolves manager Stale Solbakken says he is not embarrassed after his Championship side were knocked out of the FA Cup by non-league Luton Town.

Alex Lawless scored the only goal of the game to increase the pressure on Solbakken, who has won just once in the last six matches.

"There will be a lot of questions over me but that is normal, that's football," said Solbakken.

"I can put it right. I'm not embarrassed by the result."

Four-times FA Cup winners Wolves have slumped to 18th in the Championship, with 44-year-old Norwegian Solbakken, who was appointed in May 2012, saying earlier in the week that he has not heard anything to suggest his job is under threat.

Luton were deserved victors at Kenilworth Road, with Welsh midfielder Lawless scoring their winner in the 46th minute after Kevin Foley made a mess of a clearance.

"I can't fault the players' effort," said Solbakken. "First half we did well, but second half we didn't because our physical presence in the box was not enough.

"We should have been two goals up in the first half. We had two clear chances which we failed to take, and when they scored with their first or second attack of the second half we struggled to come back.

"They protected their penalty area very well. They overcrowded it in the second half and we didn't manage to win those battles. We tried to put crosses in but it didn't work."

Luton's win was one of the shocks of the third round and their margin of victory could have been greater, with Andre Gray, released by Wolves as a teenager, seeing one effort saved and Jon Shaw wasting another good chance.

"They will struggle to pick out the Blue Square Premier side when watching the highlights," said Hatters manager Paul Buckle.

"It was tough for Wolves. If it's going to be tough for teams like Wolves to come to Kenilworth Road, it gives everyone a lift.

"We're working hard, and the pleasing thing for me is that the players showed just how capable they are.

"Andre Gray caused them a lot of problems, he seems to be getting better and better every game. People will pay money to watch him play, he's direct and exciting."

Buckle hopes the result will now help his side in their efforts to get promotion back into the Football League. Town are currently sixth in the Blue Square Premier, just two points outside the play-off places with three matches in hand on fifth-placed Kidderminster.

"We have to use this to kick on in the league - we know we have to put a run together," added Buckle.

"We've been in this division for four years, and I'm looking for the magic wand to get us into the Football League."