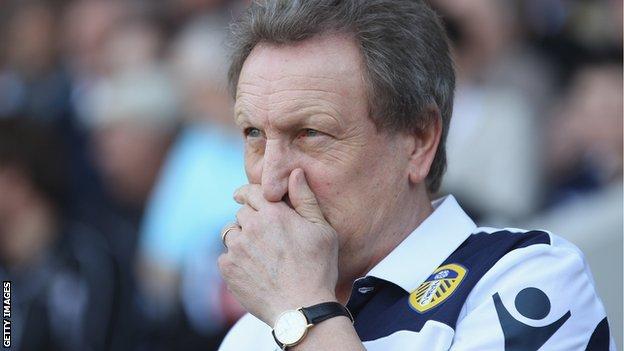 Warnock listened to radio commentary of the third-round tie and spoke to his team at half-time via a mobile phone.

"He made the decision to change the team at half-time and it worked," said his assistant Mick Jones.

Leeds' preparations were disrupted by Warnock and a number of senior players coming down with a virus before Saturday's game at Elland Road.

The Whites made six changes from their 1-0 home win over Bolton in the Championship on New Year's Day, while Jones and first-team coach Ronnie Jepson took charge in the absence of Warnock, who stayed at home.

Birmingham created the better first-half opportunities and deservedly led when Elliott was allowed to run freely from the halfway line before blasting past Leeds goalkeeper Jamie Ashdown.

Leeds lacked creativity in the first-half and Warnock responded by demanding the introduction of El-Hadji Diouf and Sam Byram at the interval.

The move paid dividends as the home side looked sharper in the second half, with top-scorer Becchio shooting straight at Blues keeper Colin Doyle before levelling with his 19th goal of the season.

"We hadn't created anything from wide positions. Becchio and Ross McCormack needed the ball in the box and they got it in the second half," said Jones.

"Luciano missed a good chance before he scored but he doesn't freeze and went on to take his next chance so well."

Jones insists Argentine striker Becchio and teenage full-back Byram, who has impressed with his energetic displays down the right flank since making his first-team debut in August, will remain at the West Yorkshire club, despite attracting the attention of several Premier League clubs.

"If I was a Premier League manager I would be chasing them," he said. "All the top clubs are watching Sam. They would be daft if they weren't, but we have to keep those two and I think we will."