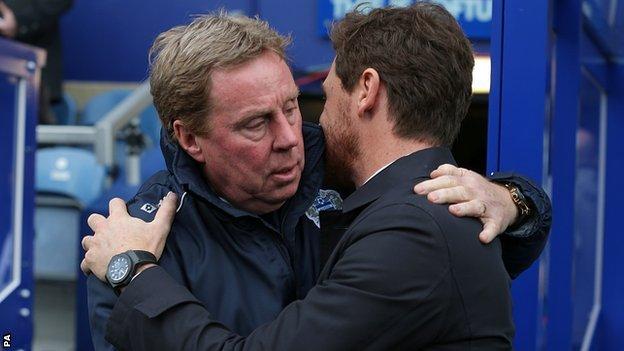 QPR put in a tenacious display as they earned manager Harry Redknapp a draw against his former club, Tottenham.

But that was a rare scare for a resolute home side, who went close when Shaun Wright-Phillips had a shot deflected wide by Michael Dawson.

Defoe also had a second-half shot saved by the leg of Cesar but the visitors could not break down their rivals.

"A valuable point for Harry Redknapp and QPR. Tottenham continue their unbeaten run, which is now seven games. There were not many scoring chances. There was a warm exchange between the two managers at the end and you don't often see that."

The match was Redknapp's first against Spurs since he was sacked by the White Hart Lane outfit last summer.

Having insisted that he bore no animosity either to his former employers or to his successor Andre Villas-Boas, Redknapp might have a slight smile of satisfaction as his relegation-battling side ended Tottenham's run of four successive wins.

The visitors' record of having scored in every away game in the top flight so far this season was also ended as they failed to show the guile and creativity to break down the Hoops, who again showed signs of improvement to suggest they can avoid the drop.

QPR had registered a shock win over Chelsea in their last league outing and the Loftus Road side continued to show the hard-working attitude and resilience that victory was built on to frustrate Spurs.

Employing a 4-5-1 formation with playmaker Adel Taarabt playing as a striker, the home side shut down the time and space the visitors had on the ball with admirable determination and discipline.

When QPR were almost breached, keeper Cesar came to their rescue with a top-class double save.

The Brazilian tipped a 22-yard Defoe shot against the post and, after Adebayor latched on to the rebound, sidestepped defender Clint Hill and got in a low shot from 12 yards, Cesar got a hand to the strike to send it over.

That was as close as Tottenham got to a goal as they struggled to make their superior quality count against the home side's work-rate.

QPR's defensive solidity came at the cost of tempering them offensively, although a rare foray forward from them did almost stun Spurs.

Taarabt stabbed a piercing pass through the Spurs defence into the run of Wright-Phillips, who cut inside before his effort was deflected wide by lunging centre-back Michael Dawson.

The home side were impressively nullifying the threat of Spurs wingers Gareth Bale and Aaron Lennon and, while the entire QPR side were playing their part, Stephane Mbia and Jamie Mackie deserve honorary mentions.

Midfielder Mbia's strong presence and Mackie's tigerish play set the tone for their side.

Still Tottenham dominated possession but could not capitalise, with fleeting chances seeing Kyle Walker send a free-kick just high and Cesar again rescuing his side when he saved a Defoe shot with his leg.

QPR's best hope of a goal was to catch Tottenham off-guard and they almost did so when Taarabt played a pass through to Wright-Phillips, who was thwarted by Spurs keeper Hugo Lloris rushing out of his goal to clear.

Wright-Phillips nearly created a late chance for himself when he surged at the Spurs defence only to stumble as the match ended in stalemate.

"That was very bit as good as the performance against Chelsea (a 1-0 win) - we worked our socks off against a real top team today. I can't ask for more than that.

"We restricted to them very few opportunities. Nedum Onouha and Fabio nullified two fantastic wingers That was the quietest I've seen Gareth Bale for many a year."

With regard to the transfer window, Redknapp added:

"You hope you can get a couple of players in but if you don't we keep going with what we have.

"They defended very well; we wanted to play with a higher tempo, but they frustrate you.

"Julio Cesar had a great game. We had some big chances; in a game like this it's important to score first.

"It was a difficult game for us, but we got an away point so we are satisfied."

When asked about Redknapp Villas-Boas said:

"I have tried to be respectful and I think Harry is the same. He's been a great example to follow so there are no hard feelings."