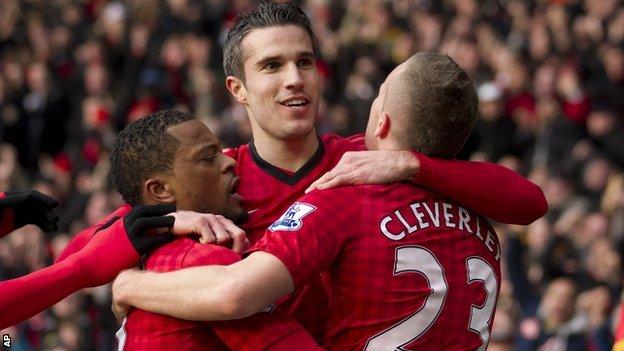 Manchester United kept a firm grip on the Premier League title race with a deserved victory against Liverpool at Old Trafford.

The meeting had been billed as the battle of the strikers between Manchester United's Robin van Persie and Liverpool counterpart Luis Suarez.

And it was Van Persie who made the decisive contribution as he put United ahead with a brilliant first-half finish then provided the free-kick for the second after 54 minutes as Patrice Evra's header deflected in off Nemanja Vidic.

Liverpool's £12m signing from Chelsea Daniel Sturridge scored for the second successive game after coming on as substitute to give Brendan Rodgers's side hope and set up an anxious finish for United.

Sturridge missed a glorious chance to give Liverpool a point that their inferiority for the first hour barely deserved, but United closed out the win to go 10 points clear at the top of the table ahead of Manchester City's visit to Arsenal.

The scale of Van Persie's influence since his £24m summer arrival from Arsenal can be illustrated by the fact that this was his 10th goal in 10 games - and he has scored in nine of them.

United were eventually relieved to get the three points after outplaying Liverpool for long periods, only to fail to convert a succession of chances in the opening 45 minutes. One could only imagine manager Sir Alex Ferguson's reaction had they squandered their advantage.

"A narrow win for Manchester United, who were supremely comfortable for the first hour with goals from Robin van Persie and Nemanja Vidic putting them in front.

"Liverpool striker Daniel Sturridge's introduction changed the game and the visitors bossed the end of the game. Liverpool gave their rivals a scare but United take the points."

Liverpool can take a measure of consolation from a lively closing phase, but the 24-point gap between themselves and the club they regard as fierce rivals makes painful reading. They were too passive and negative until United had a two-goal lead, with £15m summer signing Joe Allen looking out of his depth in midfield before he was taken off.

Rodgers decided to keep Sturridge on the bench - leaving Suarez with virtually a watching brief in a first half controlled by Manchester United.

Danny Welbeck was a somewhat surprising selection alongside Van Persie but more than justified his inclusion with an energetic display. He was off target with one effort and then it took a brilliant tackle from Agger to halt the striker after Allen gifted United possession.

As Liverpool struggled to stay in the game, they had their biggest escape on the stroke of half-time as both Van Persie and Shinji Kagawa failed to turn in Rafael's cross, Reina needing lengthy treatment after being injured in the scramble.

Both sides made changes at the interval. Antonio Valencia replaced Ashley Young, who had been injured in a collision with Agger, while Liverpool sent on the more attack-minded Sturridge for Lucas Leiva.

It was United who extended their lead nine minutes after the break when poor marking allowed Evra to steal in on Van Persie's free-kick, his header brushing off Vidic to beat Reina.

Liverpool, outplayed for so long, needed an instant response and got one as Sturridge was first to react as United keeper David de Gea could only push out Steven Gerrard's shot.

At last the battle had been joined, but it still needed Reina to show great athleticism to save from Shinji Kagawa's precise 20-yard effort.

Remarkably given their first half domination, United spent the closing minutes hanging on and Sturridge wasted a great chance to give Liverpool an unlikely point after Suarez wriggled his way into the area.