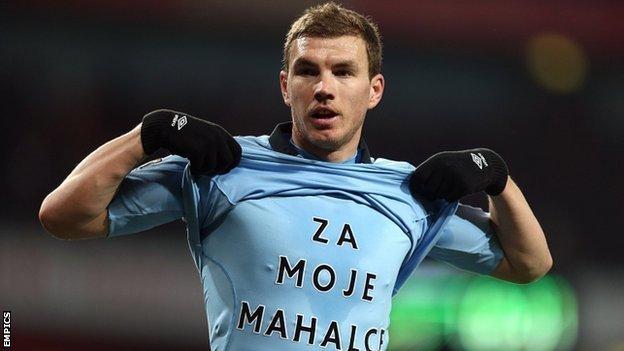 Manchester City clinched an eventful win at Arsenal to keep up the pressure on leaders Manchester United.

The Gunners had Laurent Koscielny sent off after 10 minutes for hauling down Edin Dzeko in the box, but Dzeko saw the resulting penalty saved.

City poured forward and James Milner put them ahead with an angled finish.

Dzeko made it 2-0 from close range but Arsenal dug in after half-time and Vincent Kompany's late red card meant both sides finished with 10 men.

Kompany will feel the decision, for what referee Mike Dean adjudged to be a reckless tackle on Jack Wilshere, was harsh but it gave the Gunners hope in the last 15 minutes.

Even then, the home side struggled to create chances, and their first serious shot on target came in the 90th minute when Theo Walcott beat Joe Hart but saw Joleon Lescott clear off the line.

City's win did not end up being as resounding as it had threatened to be, but it was still a crucial result in the title race.

Manchester United's victory over Liverpool earlier on Sunday had increased their advantage at the top of the table to 10 points, piling the pressure on City to respond with a positive result.

The defending champions' appalling record at Arsenal - they had not beaten the Gunners at the Emirates Stadium or Highbury in the league for more than 37 years - did not offer Roberto Mancini's men much encouragement of managing that before kick-off.

But Koscielny's 10th-minute sending off, after he had wrestled Dzeko to the ground inside the area by wrapping two arms around the Bosnian striker to prevent him running on to a Gareth Barry header, handed City the perfect platform to change that awful statistic, and keep their neighbours in sight.

Manchester City had waited more than 37 years for an away league win against Arsenal. None of their last 27 league visits to Highbury or Emirates Stadium ended in victory, with their previous success coming when Asa Hartford, Joe Royle and Rodney Marsh scored in a 3-2 win at Highbury on 4 October, 1975.

Dzeko made a hash of the resulting penalty, firing it straight at Wojciech Szczesny's legs and seeing the Gunners keeper grab the ball after it rolled back towards him along the goalline.

It did not take City long to make their extra man count, however. Arsenal switched off at a free-kick, which Barry took quickly, and Carlos Tevez slid Milner clear to beat Szczesny with a powerful angled finish.

More chances followed, with Javi Garcia heading the best of them wide. Arsenal could do little but try to halt the relentless pressure, but they conceded a second goal after 32 minutes.

Again, more could have been done more to prevent it. Milner fired in a dangerous cross after Pablo Zabaleta got the better of Kieran Gibbs down the right and, although Szczesny kept out Tevez's initial effort, Dzeko was on hand to tap home the rebound.

Only a Wilshere header off the line stopped Garcia heading home a third before half-time and, at the interval, City might have been thinking of how they could give their goal-difference a boost.

Instead, Arsenal showed commendable spirit to stop the flood of City attacks, even if they rarely threatened at the other end.

Szczesny did well to dive at the feet of Tevez when he ran clear but, aside from an Olivier Giroud header that flew over Hart's bar, that was the most meaningful incident of any kind until Kompany saw red.

City's captain got the ball when he slid in on Wilshere and protested his innocence to referee Dean, but the official made it clear he felt it was a dangerous challenge.

With parity restored in terms of men on the field, the home fans tried to roar their side forward.

But the closest Arsenal came to a reply was when substitute Lescott denied Walcott, leaving Arsene Wenger's men six points adrift of a top-four spot, albeit with a game in hand on fourth-placed Tottenham.

Arsenal manager Arsene Wenger: " "It was frustrating [to go down to 10 men] but we got away with it [with the penalty miss].

"But we were too timid and did not have enough authority on the game. We let them dictate the game to us and when we went 1-0 down it was difficult."

Manchester City manager Roberto Mancini: "If you play with 10 players it is very difficult [like Arsenal had to do for most of the game].

"But, we started with a good attitude and pressed high as we wanted to win the game, it was easier after the sending off. Second half we were too soft and I thought the game could re-open.

"It was an important victory. We knew it was difficult to play here [at Emirates Stadium]."