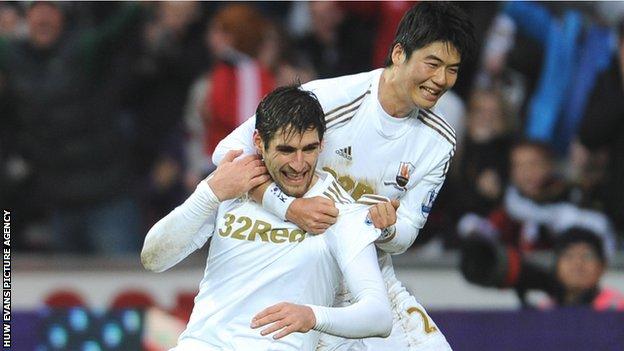 But the Swans manager says he could have done without a replay at the Emirates Stadium on 16 January in the midst of a busy schedule.

"The last thing I want is to lose," said Laudrup after the 2-2 draw.

"It puts one more game on the table for us in January when we already have a lot of games, but every footballer likes to play games."

As well as Premier League games against Everton, Stoke and Sunderland in January, Swansea face a two-legged Capital One Cup semi-final against Chelsea.

"A replay is not exactly what I am looking forward to with the two Chelsea games in mind and league games," Laudrup added.

"It is very tight but when you have been in this profession at the highest level you always want to play and win."

Graham struck in the 87th minute to earn Swansea a 2-2 draw at the Liberty Stadium on Sunday.

Goals from Lukas Podolski and Kieran Gibbs gave Arsenal the advantage in the final 10 minutes, after Michu had put Swansea in front.

"I think the overall feeling is that it was a fair result. In the first half Arsenal had only one or two shots at goal and we went closest with a shot from Danny Graham," Laudrup said.

"The second half we made a couple of changes that paid off with Michu's goal, but to be fair to Arsenal they put us under pressure, they kept the ball, took over possession and in those 15 minutes we lost the ball too much.

"They did not score in that spell and I thought we would win 1-0, then they scored two very late goals but again we came back and we again showed the character of our team to come back and score the equaliser.

"It also shows we are building. To play against Arsenal and allow ourselves to have one of the league's top scorers on the bench and still stand up to Arsenal is great to see.

"It shows the depth of the squad is there and we will need it."

Michu arrived at the Liberty Stadium last summer from Rayo Vallecano for what is increasingly looking like a bargain £2m and now has 15 goals from 24 appearances.

The Spaniard started the game against Arsenal on the bench but scored with his second touch after coming on as a second-half substitute.

"Michu was not at 100%. He has had an ankle injury and has a back problem," Laudrup said.

"I could have started him and he could have played an hour but I wanted to see if Danny, after two goals in two games, could keep up his momentum and he did.

"He worked hard, had a great spirit, and last couple of games we have seen the Danny we saw at the end of season.

"Not just his scoring but making the right runs when we have the ball, and he looks fit and confident and that is positive for us."