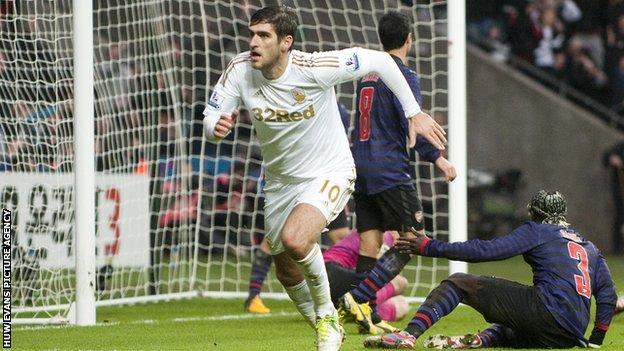 Swansea City have received no official offers for striker Danny Graham, according to manager Michael Laudrup.

Sunderland have emerged as potential suitors for 27-year-old Graham, whose late goal on Sunday ensured an FA Cup third-round replay with Arsenal.

Laudrup will speak to Graham about his future and suggested the decision to stay or not might be up to the player.

"He is playing well and is important for us because he is scoring goals, but let's see what he says," said Laudrup.

Graham showed his worth on Sunday with a late equaliser to force a third-round FA Cup replay with Arsenal.

Having been on the bench for much of the season so far, Graham has started in Swansea's last three games and scored a goal in each.

After scoring the opener on a 2-1 Premier League win at Fulham, he scored a last-minute equaliser to snatch a 2-2 league draw at home to Aston Villa and was the saviour against in the FA Cup against Arsenal.

But Graham has admitted feeling frustrated by the lack of starts this season, having been a regular under former manager Brendan Rodgers, scoring 14 goals in 39 appearances.

The situation has alerted rival Premier League clubs, but Laudrup said: "We've not had any official bids."

Talks over Graham's future are imminent and Laudrup remained coy about whether they would consider any offers from rival clubs.

"I am going to speak to all players who are not playing regularly but I do not want to comment once I have spoken to them," added Laudrup.

"If I am talking to the players it does not mean I am telling them they can leave."

Laudrup has been promised money to strengthen his squad during the January transfer window and a striker is one of his priorities.

He has recently spoken highly of Celta Vigo striker Iago Aspas, but Swansea are unlikely to trigger the player's reported £8m release clause.