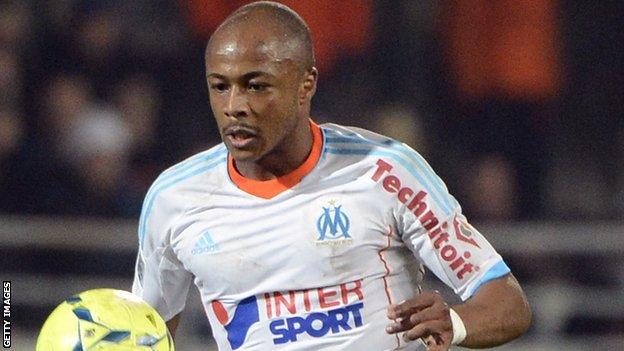 Ghana coach Kwesi Appiah has dropped Andre 'Dede' Ayew from his squad for the upcoming Africa Cup of Nations.

Ayew failed to report to a training camp in Abu Dhabi for a hamstring injury to be assessed by Ghana's medical team.

The midfielder was released by French club Marseille so he could travel as requested by the Ghana FA.

"I've decided to exclude Andre Ayew from the Ghana squad for the African Cup of Nations," Appiah said.

In line with my vision of taking only fit players for the Africa Cup of Nations, I have decided that to work only with the players currently in camp.

"Following Andre's inability to join the Black Stars squad by Monday morning for Ghana's team doctors to assess the extent of his injury and fitness for the tournament, I have decided to work only with the players currently in camp."

Under Fifa regulations clubs were required to release players on Saturday, two weeks before the Nations Cup kicks off in South Africa.

Clubs must also allow injured players to be checked out by their national team doctors.

"Andre did not turn up despite being released by his club and air tickets provided by the GFA for him to travel from France to beat the deadline," the statement continued.

"Unfortunately, Andre failed to report to camp and indicated that owing to the treatment he was receiving from his doctor he would report to camp on Wednesday 9th January 2013.

"He was further advised to endeavor to report to the camp by latest Monday 7th January 2013 because Wednesday 9th January 2013 was the deadline for submission of the list of 23 players to Caf.

"As Andre plans to arrive on Tuesday it means he would be unable to join any of my six training sessions before CAF's Wednesday deadline for the submission of the final squad.

"In line with my vision of taking only fit players for the Africa Cup of Nations, I have decided that to work only with the players currently in camp.

"I have personally explained the rationale behind the decision to Andre and I will continue to count on him in future matches if he is fit."

Appiah now has a provisional squad of 25 players and must drop two for Wednesday's deadline for naming final squads for the Nations Cup.

Ghana begin their Nations Cup campaign on 20 January against DR Congo before facing Mali and Niger in Group B.