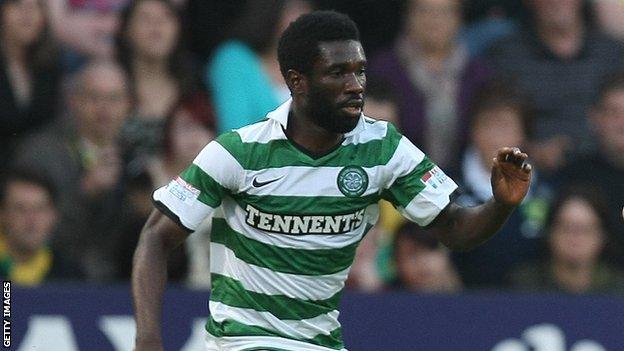 Nigeria coach Stephen Keshi has dropped four players from his preliminary squad for the upcoming Africa Cup of Nations finals.

Keshi had already accepted he would be without Millwall defender Danny Shittu and Shola Ameobi of Newcastle United for the tournament.

Ibrahim's late arrival for the camp in Portugal and lack of playing time with with former Scottish club Celtic ultimately cost the former youth international his place.

The decision by Keshi means that Ibrahim can now concentrate on seizing a second chance in Scotland and make up for a 'tough' four years at Sporting Lisbon, PSV Eindhoven and Celtic.

The 21-year-old switched from Celtic to Kilmarnock last week after failing to become a first-team regular in Glasgow.

"It's not just been tough, it's been heartbreaking. You join a new club and you want to impress and show what you can do," he told BBC Sport.

"I just need someone who believes in me and will give me a chance to make a contribution.

"I'm so eager to achieve something at Kilmarnock and be a success at this club because I now understand the Scottish game.

"This new year is something I am really looking forward to. Deeply, I hope to finally settle down this year."

A member of the Nigeria side that won the 2007 Fifa Under-17 World Cup in South Korea, Ibrahim was hailed as a successor to Jay-Jay Okocha in the Nigerian midfield that has lacked a creative verve over the years.

Keshi is expected to announce his final 23-man squad on Tuesday, a day before the final deadline for submitting players for the tournament.