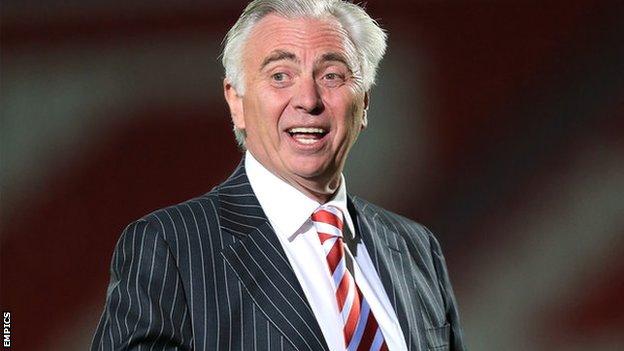 Doncaster Rovers chairman John Ryan says the club "have a plan B" following the exit of manager Dean Saunders.

Welshman Saunders left Rovers, who are second in League One, to take over at Championship club Wolves.

Rovers joy on the road

Doncaster have recorded the joint highest number of away victories in the Football League so far this season. Their nine wins is matched only by League Two's Gillingham and Exeter City.

"In the 15 years I've been chairman here, we have always had a plan B," Ryan told BBC Radio Sheffield.

"When we appointed Sean (O'Driscoll) and when we brought in Dean there were people questioning it, but now look at where we are."

Saunders had been in charge at the Keepmoat since taking over from O'Driscoll in September 2011.

He was unable to save them from relegation from the Championship, but despite a massive overhaul of the squad last summer, they have amassed 50 points from 26 league matches this season.

Given the club's position in the league, Ryan expects the manager's position to attract a lot of interest.

"We've been very underrated this season and I can't believe there are six clubs ahead of us in the betting for the League One title," he added.

"There's nothing in this league that frightens me and I'm hopeful that things will still turn out for the best."