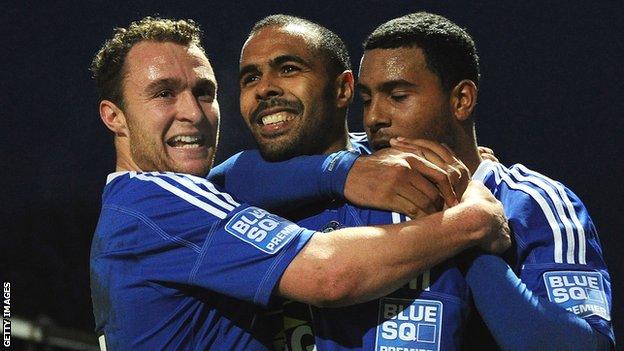 Non-league Macclesfield Town would like to face Premier League neighbours Wigan in the FA Cup fourth round, according to chief executive Jon Harris.

the Silkmen will play

Harris told BBC Radio Manchester: "It would be lovely if it was Wigan because there's a north west feel about it and they're a Premier League side.

"The television companies may look at it as a potential banana skin."

If it was a live TV game, it would probably be worth around £300,000, which would be the season sorted really. It makes life a lot easier.

Macclesfield, one of two non-league sides left in the competition, are in the fourth round for the first time in their history, having come from a goal behind to beat Cardiff 2-1 at the Moss Rose.

Manager Steve King had the club he supports, after his side's surprise third-round victory.

But now they must wait for the outcome of the 15 January replay between Wigan and Bournemouth, who

Harris continued: "It's an exciting draw for us. We would rather it be Wigan. We said after Saturday that we would take anybody at home or one of the big boys away.

"Wigan would be our first choice, but we have no control over that replay.

"If it was a live TV game, it would probably be worth around £300,000, which would be the season sorted really. It makes life a lot easier."

Meanwhile, it is back to reality for King's men on Tuesday evening, when they travel to Braintree in the Blue Square Bet Premier.

French defender Thierry Audel could be available to make his debut after agreeing a move to the Moss Rose.

The club are awaiting international clearance for the 25-year-old, who had been playing for Italian side Pisa.