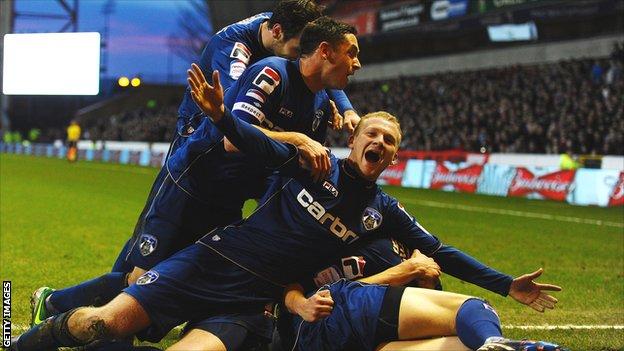 Oldham chairman Simon Corney believes the League One side can shock Liverpool in the FA Cup fourth round.

The Latics, who last season, have been

"It's nice for the fans to bring a club like Liverpool to us because I think we've got a chance, I really do," Corney told BBC Radio Manchester.

"If we're on TV and we're a sell-out, the money will still be good."

Paul Dickov's side, currently 19th in the third tier, on Saturday to reach the fourth round.

Oldham faced Liverpool in the FA Cup third round last season - Robbie Simpson gave the Latics a shock lead at Anfield, but the Premier League side eventually prevailed 5-1.

"It's been a whirlwind 48 hours since we beat Forest and drew Liverpool," continued Corney.

"I'm just delighted for the fans. They were fantastic on Saturday and it's going to be a great day for them.

"It would have been more lucrative [to be drawn away from home] but it's not always about the money.

"But it is a relief to get some extra cash coming through the turnstiles. Every year we struggle, we make a loss, and when you get a run like this, it's just fantastic."

Oldham in the days leading up to the win at the City Ground, and it is hoped Dickov's side can take the confidence gained from their FA Cup success into their league campaign.

Corney added: "It's been a difficult couple of months and I felt for Paul because losing your staff is not ideal for anybody. For the players and the management, it's a great boost.

"Hopefully we can take that form into our league matches. I don't think we're going to get into the play-offs this season - we're more likely to be in a relegation battle.

"But it shows we've got the quality to take care of ourselves, and if we can play the way we played in the second half against Nottingham Forest we'll be fine."