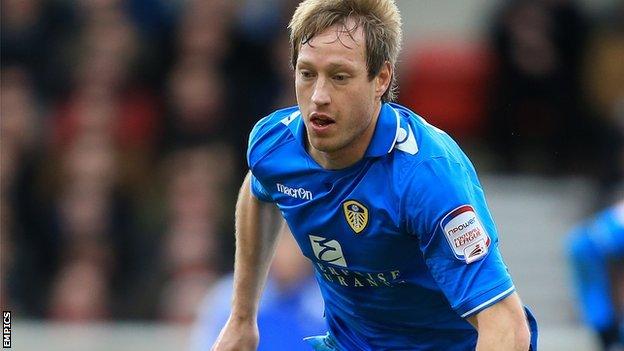 Leeds United assistant Mick Jones says they are afraid striker Luciano Becchio could be on his way out of Elland Road during the current transfer window.

The 29-year-old Argentine has scored 19 goals in 29 appearances this season.

Jones told BBC Radio Leeds: "My biggest fear is that there could be pressure on us from other clubs for him.

"Look at his form at the moment and he's bound to be hot property. I'd be worried if certain clubs came in for him both here and abroad."

He added: "We're working hard to keep him and Sam Byram beyond the end of their current contracts.

"I don't think Sam will go because he's in the right place to develop as a player but there might be some pressure to sell him."

Becchio, who joined the Elland Road side from Spanish club Merida UD in 2008, signed a three-and-a-half-year deal in December 2010 and has scored 76 goals in 190 league appearances.

Full-back Byram, 19, broke into the Leeds first-team at the start of the season and has played 32 times this campaign.

He agreed a new three-year deal in August 2012 but is rumoured to be attracting interest from Premier League sides Fulham, Liverpool and Norwich.