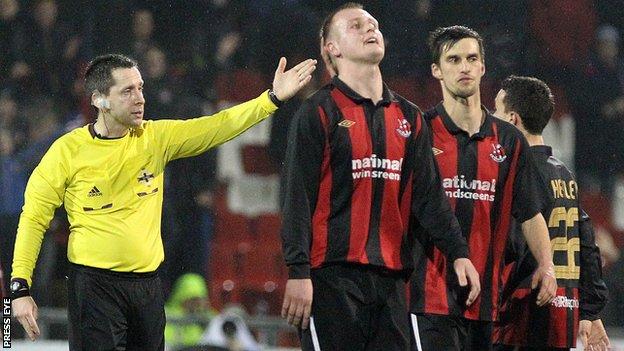 Crusaders will take on holders Linfield in the Irish Cup fifth round on Saturday without striker Jordan Owens and defender Craig McClean.

Owens has been handed a two-match suspension following his straight red card in the 22 December Premiership match against the Blues.

Former Dungannon full-back McClean has been given a one-match ban for picking up five yellows cards this season.

Owens got the goal when Crusaders beat Linfield in the League Cup semi-finals.

Earlier in the season, Linfield got the better of the Crues 1-0 in the County Antrim Shield semi-final.

They are in the League Cup decider again this season, playing Premiership leaders Cliftonville at Windsor Park on Saturday, 26 January.

"We are meeting Linfield a bit earlier in the Irish Cup this season. They are flying at the moment but we are not doing badly ourselves," said Baxter.

"We have been in a number of finals in recent seasons and that is a sign of a successful team.

"We have a few suspensions but will just have to get on with it."