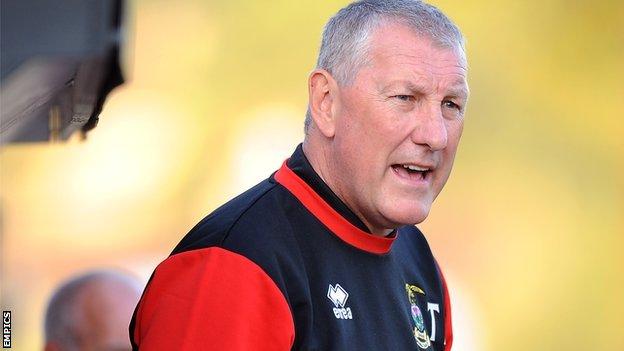 Barnsley have held "constructive discussions" with Terry Butcher over their managerial vacancy and plan to have further talks on Wednesday.

The Tykes turned their attention to the 54-year-old Inverness Caledonian Thistle boss after being rejected by Sean O'Driscoll.

Keith Hill was sacked last month with Barnsley bottom of the Championship.

However, Inverness chairman Kenny Cameron insisted he would not give up hope of keeping Butcher, despite allowing him to speak to Barnsley.

"We have given them permission to speak to Terry," he said on Monday.

"We will be doing everything possible to ensure that Terry remains with the club and finishes what has been an incredible journey to date for us all.

"Given our current position in the Scottish Premier League and the fact we have a Cup semi-final on the horizon it is inevitable that if any managerial positions come up our management team will no doubt be on the radar."

Cameron also told BBC Scotland that there has been no approach from Doncaster Rovers for Butcher.

Dean Saunders left the Yorkshire club on Monday to become manager at Wolves.

Butcher has been in charge at Inverness since January 2009.

Caley Thistle are currently second in the Scottish Premier League, a position that would see them qualify for the Europa League if they maintain it to the end of the season.

They have lost just three games all season in the league, one fewer than league leaders Celtic.

The Tulloch Caledonian Stadium side are unbeaten in their last nine matches in all competitions and face Aberdeen on 19 January when the SPL resumes after a winter break, with the Highlanders still in both domestic cup competitions.

Butcher's last spell in England saw him leave Brentford by mutual consent in December 2007 after just five wins in 23 matches.