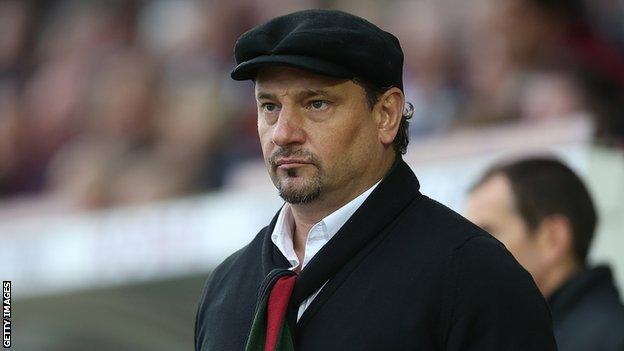 Aldershot Town manager Dean Holdsworth has hailed his squad after the club reached the fourth round of the FA Cup for the first time in their history.

The Shots are in the last 32 for the first time since their reformation in 1992 after their win over Rotherham.

He told BBC Surrey: "Round four is somewhere the club has never been. You can never take that piece of history away from the players.

"It is brilliant for them and from the club point of view it is a real boost."

He added: "We knew going into the Rotherham game that the rewards were financial and also for the accolade [of making history]."

It's not been a great season for us league-wise. These moments don't come along often and you have to savour them

The Shots have beaten non-league side Hendon and fellow League Two outfits Fleetwood Town and the Millers to make it to the fourth round.

The furthest the club have progressed before is to the third round stage in 2006-07 and they have been beaten in the second round in the last four seasons.

"You don't know know how many times you will get a go at it in the FA Cup, especially in these sort of rounds.

"I've not had too much success and it's the furthest I've been by a long shot.

"It's not been a great season for us league-wise and these moments don't come along often and you have to savour them. It's a great adventure for us."

The Hampshire club face a trip to Championship side Middlesbrough in the fourth round.

Holdsworth is pleased to be visiting the Riverside Stadium but expressed slight regret at not being paired with a top-flight side.

"It's a fabulous stadium for the players and it will be a great experience," said the Shots manager, who reached the FA Cup semi-finals as a player with Bolton in 2000.

"We could have got a Premier League side, which we would have liked to have done, but there are probably less fashionable teams left in the competition as well.

"We are probably being a little bit greedy, that we wanted a bit more than what we got.

"We've still got a chance and will be confident going into the game."