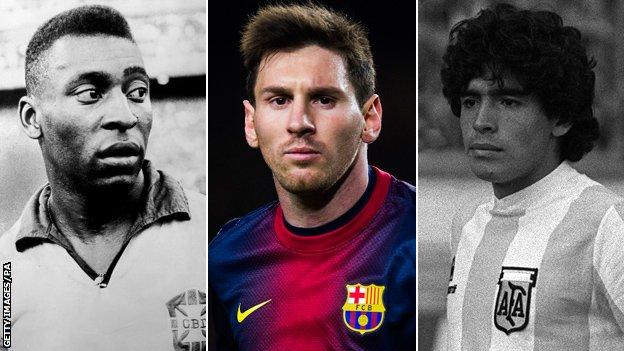 Lionel Messi's status as the planet's finest footballer was further cemented as he won Fifa's Ballon d'Or for an unprecedented fourth successive time.

It is to the eternal misfortune of his closest competitor, Real Madrid's Cristiano Ronaldo, that he plays in the time of the great Argentine otherwise he would surely have claimed the coveted crown more than once.

Ronaldo and Messi's Barcelona team-mate Andres Iniesta - a Euro 2012 winner with Spain - were the other contenders and would be fitting and worthy winners in any era. This, however, is not any era - it is the Lionel Messi era.

Messi's brilliance is backed up by a blizzard of compelling statistics, not least his recent feat of breaking German striker Gerd Mueller's 40-year-old record by ending the calendar year with 91 goals for club and country.

The manner in which Messi has individually dominated the game's recent years is only emphasised by the fact that he has effectively made its highest individual honour his personal property.

And at the relatively tender age of 25, and with a recently agreed deal to keep him at the Nou Camp until 2018, he has power and talent to add to his unique collection of Ballon d'Or honours.

The latest coronation will also give fresh impetus to a debate that now rages with more intensity around Messi. Namely - is he the greatest to have played the game?

He can justifiably take his place alongside other legends such as France's Michel Platini, who won three times in succession from 1983. Johann Cruyff won three times between 1971 and 1974 but his sequence was interrupted when Franz Beckenbauer won in 1972.

Brazil's Pele and Messi's fellow countryman Diego Maradona are inevitably the other names always factored into the equation when working out who is the greatest - but this is a question that is almost impossible to answer definitively.

The argument is shaped by, and in, different generations. The game and players change, which makes the debate even more of an inexact science.

And of course, who is to say Pele or Maradona would not have emulated Messi's feat had they been eligible to win the Ballon d'Or? The award was created by France Football magazine in 1956 to honour the finest European player of the previous calendar year - non-Europeans were only eligible from 1997, a time way beyond that of Pele and Maradona.

Those who support the cases of Pele and Maradona instantly evoke their impact on the highest stage of all, the World Cup, a place where Messi has yet to deliver the brilliance he does on a weekly basis for Barcelona.

Pele's name burst into football's psyche as a 17-year-old when Brazil won the World Cup in Sweden in 1958. Injury curtailed his involvement when Brazil won again four years later and he was effectively kicked out of the tournament as an ageing team faded in England in 1966.

And yet it was a sign of his enduring brilliance that he won another World Cup with Brazil in Mexico in 1970 as the outstanding figure in a team still widely regarded as the greatest there has ever been. He headed a goal in Brazil's 4-1 win against Italy in the final in Mexico City, the crowning glory of his career.

Many may prefer to recall Maradona's infamous "Hand of God" that helped to beat England in the quarter-final, once more in Mexico, but this must never overshadow how he bestrode that tournament and dragged the Argentina team in his slipstream to victory.

He suffered mixed fortunes around that triumph as he was sent off against Brazil in 1982 and sent home for failing a drugs test in the United States in 1994. These are events which have scarred his reputation but nothing can be stripped away from just how glorious, exciting and untamed his talent was.

There is still time for Messi to make one of those showpieces his own but his backers can press his claims by listing his consistent achievements in the Champions League, regarded by many as an even more challenging environment than the World Cup.

Manchester United have felt the pain as Messi scored as Barcelona beat Sir Alex Ferguson's side in two finals. The range of his game was exemplified by a towering header in the 2-0 win in Rome in 2009 then a flashing shot beyond Edwin van der Sar at Wembley two years later.

What is beyond dispute is that these are three names who have stamped their mark indelibly on football.

And for now, in this age, Messi's fourth Ballon d'Or is proof that he reigns supreme.